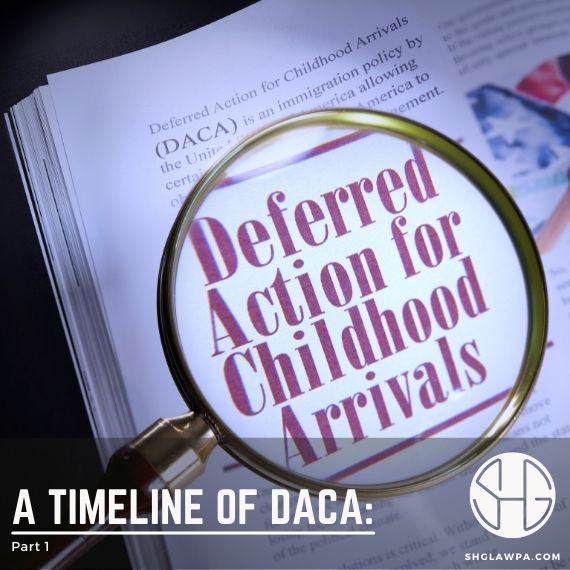 June 15th 2022 marked the 10-year anniversary of the Deferred Action for Childhood Arrivals program, otherwise known as DACA, in the United States. During the 10 years that DACA has existed, there have been many changes, good and bad, that have not only affected the lives of the individuals who have benefited from the program but have also affected the lives of those who hoped to someday have the opportunity to reap such benefits as well.

What is the Deferred Action for Childhood Arrivals Program (DACA)?

The Deferred Action for Childhood Arrivals program, otherwise known as DACA, is a form of administrative relief enacted by the Department of Homeland Security during the Obama administration. The program gave many undocumented individuals living in the United States to step out of the shadows and live among their neighbors, friends and peers without having to fear persecution. This Obama-era policy allowed many undocumented immigrants the ability to obtain a temporary work permit, which in itself opened various other doors for such individuals. DACA does not provide a path toward legal citizenship but does delay deportation for many individuals.

Like any policy, law or rule that is created by any organization and/or branch of government anywhere in the world, there are some exceptions/requirements for individuals who wish to benefit from them. When it comes to DACA, the requirements for consideration are outlined not only in this groundbreaking memorandum written by then Secretary of Homeland Security Janet Napolitano but are also outlined by U.S. Citizenship and Immigration Services (USCIS), It states that those wishing to apply for DACA must meet the following requirements/criteria:

Although the program has been in place for the past 10 years, it has come with its fair share of twists and turns—and wins. Its timeline has been detailed below:

June 15, 2012 – Secretary of the U.S. Department of Homeland Security, Janet Napolitano, issued a 3-page memorandum setting the groundwork for what would become the Deferred Action for Childhood Arrivals (DACA) program. This three-page memorandum outlined a “prosecutorial discretion” policy in regards to those who arrived in the US as children, effectively protecting them from deportation. Napolitano states:

“As a general manner, these individuals lacked the intent to violate the law… many of these young people have already contributed to our country in significant ways. Prosecutorial discretion is used in so many other areas, is especially justified here”

This gave more than 700,000 underaged undocumented immigrants the courage to step out of the shadows to apply for this program.

November 2014 – During Obama’s second term as president, his now Secretary of U.S. Department of Homeland Security Jeh Johnson, announced that DHS would expand deferred action to as many as 4 million parents of children who were U.S. citizens and permanent residents.

“By this memorandum, I am now expanding certain parameters of DACA…for those adults who have been in this country, since January 1, 2010, are the parents of U.S Citizens or lawful permanent residents”

This memorandum would later set the framework for what would become known as Deferred Action for Parents of Americans, or DAPA, for short.

February/June 2015 – In February of 2015, Andrew Hanen, a District Judge in Texas, went ahead and issued a nationwide injunction that would hinder DAPA from taking effect after its announcement. This injunction was a product of several lawsuits brought forth by several states, Texas included, and alleged that DAPA was illegal, citing that Congress had not expanded the scope of individuals protected under DACA. This would later go on to the 5th Circuit Court and the U.S. Supreme Court which both affirmed Judge Henen’s ruling with a 2-1 vote and a 4-4 vote respectively, with Supreme Court Justice Antonin Scalia being the tie-breaking vote. In June of the very same year, Republican Presidential candidate Donald J. Trump announced that he would “immediately terminate President Obama’s illegal executive order on immigration, immediately”.

August 2016 – Trump gives one of his many campaign speeches attacking the various immigration policies that were enacted by the Obama administration. During this month he gives a speech in the state of Arizona where he once again takes a jab at DACA stating,

“We will immediately terminate President Obama’s two illegal executive amnesties, in which he defied federal law and constitution to give amnesty to approximately 5 million illegal immigrants.”

September 2017 – Nine months after being sworn into the presidency, President Trump kept the promise that he so gallantly expressed over and over again during his campaign trail. The acting Secretary of Homeland Security, Elaine Duke, issued a memorandum announcing that the Trump administration would be rescinding DACA. In this memorandum, she cited then Atty. Gen. Jeff Sessions in which he states,

“[DACA] was effectuated by the previous administration through executive action, without proper statutory authority and with no established end-date, after Congress’ repeated rejection of proposed legislation that would have accomplished a similar result. Such an open-ended circumvention of immigration laws was an unconstitutional exercise of authority by the executive branch”

January 2018 – During the month of January 2018 the DACA program itself was hit from left to right in a way that would change the way DACA was run.

Jan 9 – In the state of California a federal judge by the name of William Alsup would go on to issue a nationwide injunction on the Trump administration’s cancellation and rescission of the DACA program.

Jan 13 – 4 Four days after as a result of the preliminary injunction issued by the state of California, U.S Citizenship and Immigration Services (USCIS) announced that the DACA program would continue to accept renewal applications and would “be operated on the terms in place before it was rescinded on Sept. 5, 2017”

Jan 20-23 – With the U.S. The Department of Justice (DOJ) having appealed the ruling of the Supreme Court in regards to DACA and the extension of DACA, further solidified the promise that Trump made while on the campaign trail regarding the fate of the immigration policies enacted under the Obama administration. From Jan 20-23, a series of events occurred.

On January 20th, the United States government went into a complete shutdown. One topic at the center of this historic shutdown was DACA as both Democrats and Republicans did not manage to come to a consensus on the standing of DACA.

On Jan 23rd, after lawmakers spent countless hours deliberating, the shutdown finally ended. The end of the shutdown not only allowed the government to reopen but it gave both Democrats and Republicans a deadline to come to a solution and address the struggles that Dreamers were incurring. Congress as a whole was given up until Feb 8, 2018, to find a compromise and solution to these topics.

Currently, the fight to solidify DACA is still being fought with many conservative states fighting to get rid of DACA. Among the few is Andrew Hanen, District Judge of the State of Texas. Even though he did file an injunction in 2015, and failed, this has not stopped him from continuing, since most recently in 2021 he filed another injunction calling DACA unconstitutional. This new injunction, if one could call it that, had the same argument and points made when he filed his first injunction. This immediately prompted President Biden to publish a memorandum calling on DHS to “fortify and preserve DACA”. Biden states:

“Sec. 2.  Preserving and Fortifying DACA.  The Secretary of Homeland Security, in consultation with the Attorney General, shall take all actions he deems appropriate, consistent with applicable law, to preserve and fortify DACA.”

Out of all of the 800,000 individuals protected by DACA, a majority were left in a place of limbo due to the various changes since the policy’s inception. They were left without news on what would happen if their DACA protections and benefits were to expire. Many began to become very uneasy as they had heard no new news regarding DACA besides what then U.S. Attorney General Jeff Sessions and other individuals within the Trump Administration said about the future of DACA.

DACA itself still continues to benefit the many DREAMERS who were brought to the United States at a very young age in hopes of a better life and gaining opportunities that would have been close to impossible back in their home countries. Many continue to fight the fierce opponents of DACA who work tirelessly day and night to undermine the program.DREAMERS are fearless, persistent, determined, and passionate about what they believe in. They not only want the world to understand that they are human beings who are here to stay, but most importantly, they want those in the United States to know that they will do everything in their power to reach their ultimate goal of becoming United States Citizens.

In the next part of this three-part series, we will hear the stories of those who currently benefit from DACA as well as hear from those who are not eligible for DACA but could benefit from the program itself. Stay tuned for Part 2: The FACES of DACA.