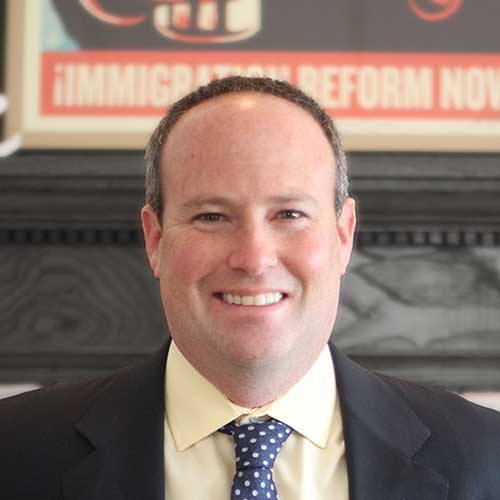 Attorney Adam Solow has over 15 years of experience litigating removal defense cases before the US Immigration Courts and the Board of Immigration Appeals (including asylum, withholding of removal, cancellation of removal, adjustment of status and complex waivers). Mr. Solow also represents clients before USCIS and other DHS sub-agencies in a variety of matters such as, but not limited to: family-based immigrant petitions (marriage adjustments), naturalization, waivers of inadmissibility, Consular Processing, and U visas for victims of crime.  He also litigates on behalf of clients in Federal Court, including Writs of Mandamus, Petitions for Naturalization, and Habeas Corpus Petitions.
Mr. Solow obtained his J.D. from Villanova Law School in 2006. During his time at Villanova, he participated in the Clinic for Asylum Refugee and Emigrant Services Clinic (CARES). A tireless advocate for his clients, he is also the former Chairman of the Philadelphia Chapter of the American Immigration Lawyers Association (AILA).  He is fluent in the Spanish and Italian languages.

I am descended from Eastern European Jewish refugees who fled persecution and discrimination at the turn of the 20th Century.  My grandparents were first generation Americans who fought against Fascism in World War II.  My wife is from Venezuela and her family also fled the current political and humanitarian disaster in that country.  As the descendent of persecuted immigrants, married to someone who also came to America to make a better life for herself and her family, I am deeply and personally aware of the injustices of our current immigration system and work tirelessly on behalf of my clients and their families.  I see the hopes and dreams of my children, wife, friends, and ancestors in the face of every client that we represent, and zealously work to help them begin their American story.