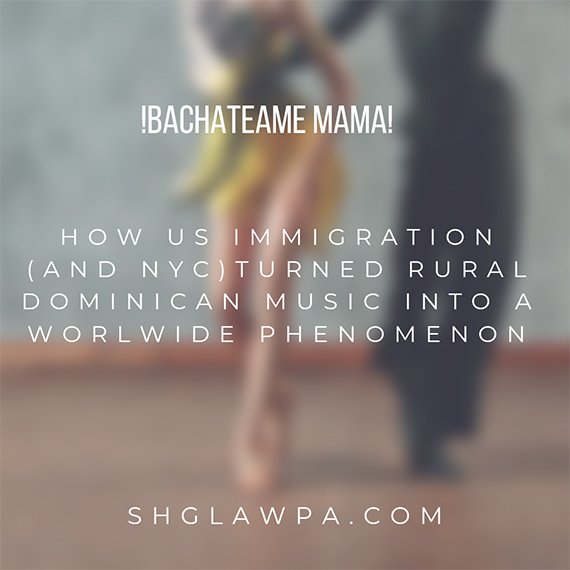 For better or worse, anybody who has ever spent more than 5 minutes in my office would know that I play bachata music throughout the workday.  I also like to dance Bachata (which I do poorly) and take weekly classes with the great Laurel Card to improve my skills.  How did a Gringo from the Mainline get into Bachata?  Well, I first got into Bachata mainly to impress my beautiful wife and dance at our wedding;)  But we can also thank the US immigration system and the Dominican diaspora for this enjoyable contribution to American culture.

Bachata, which is roughly translated to “party” or “celebration,” is a genre of Latin music and dancing that originated in the rural areas and shantytowns of the Dominican Republic in the first half of the 19th Century.  The music was first developed with a heavy guitar emphasis and heartrending love stories as its basis. Some people compare its origins to how the Blues developed in the United States. (Although I must say it’s a little more upbeat than the Blues.  For example, even when Bachata songs describe the treachery of a spouse or partner- which they often do- they still sound kind of sweet.).  Early Bachata music came with a social stigma as well.  The Dominican Dictator Rafael Trujillo reportedly despised bachata, associating it with poor, rural and/or uneducated people- just one thing among many that he (brutally) tried to erase to create a modern society.

Following Trujillo’s assasination in 1961 and the social and political upheaval that followed his death, tens of thousands of Dominicans fled the country for the United States.  More Dominicans arrived in the 1980s (including the family of our beloved paralegal, Alba Jose) following the Latin American Debt Crisis (commonly referred to as the “Lost Decade”) in that part of the world.  A large proportion, like countless immigrant groups before them, landed in New York City and settled there, many in the Bronx and Upper Manhattan neighborhoods such as Harlem and Washington Heights.  In these neighborhoods, Dominican immigrants were exposed to other musical influences such as R&B, Soul, and a new musical genre called Hip-Hop.   At the same time, young Dominican immigrants and first-generation Dominican Americans began to fuse traditional Bachata music and dance with these American influences.  This style came to be called “Urban Bachata.”

Urban Bachata produced crossover pop stars such as Romeo Santos, Toby Love, Prince Royce and Xtreme.  These stars, bilingual and knowledgeable of both Dominican and American cultures, were able to reinterpret this music for a wider audience.  By the early 2000s, Santos’ band Aventura rose to the top of the pop charts with its song “Obsession” (A song about a man who is obsessed with a woman who already has a boyfriend).  Obsession reached #1 in both Europe and the United States.  As this music evolved and gained ever more popularity, Bachata shed its lower-class identity to become a powerful symbol of the Dominican homeland and culture.

Today, Bachata is a worldwide pop phenomenon and, along with Salsa and Reggaeton, arguably the most popular Latin infused music.  In just about every Latino, American, and European city you can find a place to hear and dance Bachata.  A few years ago, for example, your author was on a family vacation in Paris.  Walking near the Pont Neuf, he heard the unmistakable guitar and lyrics of an Aventura song.  He looked down to the Quay below the street, and he was pleasantly shocked to witness a full-fledged Bachata party on the banks of the Seine.  Apparently, this is common in cities throughout the world, as evidenced by these videos from Moscow, London, and Tokyo.  Clearly, much like the Dominican immigrants who helped build America over the past few decades, Bachata has come a long way since its humble origins in the rural Dominican Republic.