Bolivian Immigration to the United States 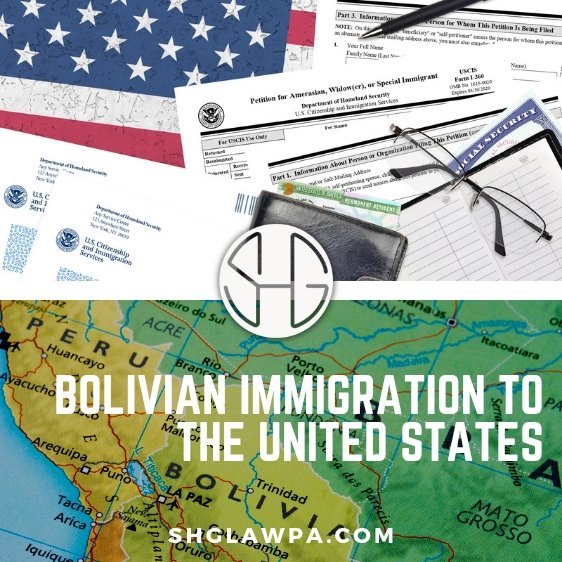 Descending from the Cordillera de los Andes and Cordillera Real mountain ranges, with peaks of more than 21,300 feet above sea level, down to the Amazonian lowlands, is Bolivia, from where we are writing today.

Bolivia, named after the Liberator Simon Bolívar, is very well known for the Cerro Rico (Rich Mountain) of Potosí, which was rediscovered by the Spanish conquerors in 1545. A silver mine of such enormous dimensions that its stories reached the ends of the world, it called numerous wealth-seekers and visionaries to settle in Bolivia. By 1630 the great city of Potosí had a population larger than most of the capitals of Europe, larger even than London.

Bolivia is situated in the very heart of South America, bordered in the north and east by Brazil, in the south by Argentina, and in the west by Perú. Paraguay lies to the southeast, and Chile in the southwest. It is a country of strong geographical contrasts, from the white Andean summits, to the lush green of Amazonia, and going through deep valleys in mid-southern Bolivia. Three main geographical areas can be observed: the Andean (23% of the national territory), Sub Andean (15%) and Plains (62%) regions.

Bolivia’s population is about 12 million inhabitants, of which about 71.6% are concentrated in the three largest cities of Santa Cruz, La Paz, and Cochabamba. It is home to 36 different indigenous nations, with the Quechua, Aymara, Guaraní and Mojeña nations constituting the majority.

Bolivia is also home to 46% of the world’s biological diversity, including more than 8,000 species within ecosystems that stretch from Amazonia to the Andes.

The Bolivian economy is based principally on the extraction and exportation of natural resources, especially gas and mineral ores. In 2020 the GDP of Bolivia was $36.69 billion (USD), while per capita GDP was $3,143 (USD). Bolivia ranks 107 in the United Nations Human Development Index Ranking of the world’s countries.

The health crisis provoked by the COVID-19 pandemic led to a recession which further increased poverty in the country. In the first part of 2021, the Bolivian economy showed important signs of recovery due to improvement in the international economy and the relaxing of restrictions adopted at the beginning of the pandemic.

Total Bolivian emigration currently is about 1 million people, with the largest number of Bolivian immigrants residing in Argentina, Spain, the U.S., Chile and Brazil. According to a recent report, in 2019 there were 93,442 Bolivian emigrants living in the US.

Bolivian migration to the U.S. started in 1875 when the country’s biggest mine owners began to export their products to New York, Chicago and California. Today, the largest concentration of Bolivian immigrants in the United States is found in the states of Virginia, Maryland, New York, Florida, Illinois, and California. Many Bolivian immigrants work in construction, with the real estate and health care industries also being important sources of employment for Bolivian immigrants in the US.  The reputation of Bolivian workers is very positive; they are sought after because they are known to be hard workers.