EB1 Aliens of Extraordinary Ability: The NBA and the Rise of Foreign Basketball Talent 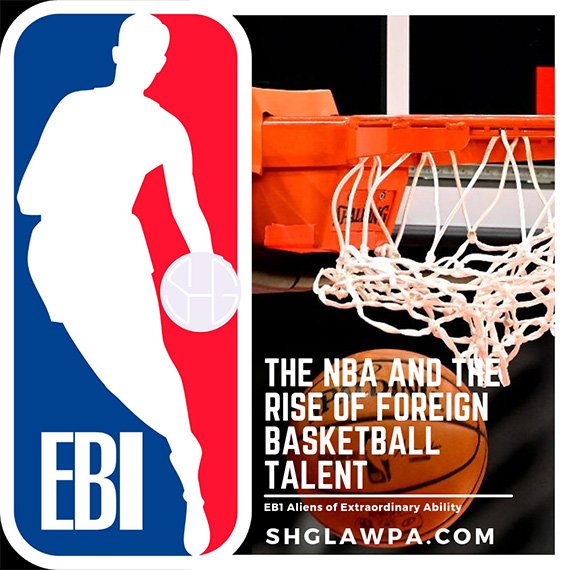 Ever since I was little, I loved following the NBA.  My father used to bring me to Sixers games at the Spectrum in the 1980s, where we saw Dr. J, Moses Malone, Mo Cheeks, and Charles Barkley.  In the 1990s and early 2000s, Allen Iverson was the “Answer” that united Philadelphia.  For a child (and as an adult) NBA players always seemed to be larger than life both on and off the court.  I also loved to play basketball and I was pretty good when I was in elementary and middle school.  In my 12 year old adolescent mind, I thought I was definitely going to be going to the NBA.  One day, when I was in 7th grade at Bala Cynwyd Middle School, a kid from Italy named Kobe moved onto our block and enrolled in our school. After a few days, he showed up for some pick-up games at our neighbor Mike Levien’s house.  It was after playing with him a few times that I realized I should probably make a backup plan just in case my hoops dreams fell through.

Dr. James Naismith, who was also an immigrant of Canada, created the game of basketball a year after moving to the United States in 1891 at Springfield College in Massachusetts. Since this humble founding, basketball has evolved to become one of the world’s most popular and widely followed sports.  The National Basketball Association (NBA) is the world’s most competitive, popular and lucrative professional basketball league. Following the phenomenon of the Dream Team at the 1992 Barcelona Olympics, basketball reached a newfound popularity for a worldwide audience.  As a result of this popularity, a new generation of world-class international players were identified, developed, and drafted into the NBA in the early 2000s.  Players such as Tony Parker (France), Dirk Nowitski (Germany), Steve Nash (Canada), Pau and Marc Gasol (Spain), Yao Ming (China) and Manu Ginobili (Argentina) became NBA all-stars and champions, and demonstrated that world-class basketball talent could be found anywhere on the planet.

For the 2021 season, the NBA reported that 107 international players from 41 countries and territories are on NBA teams for opening-night. This will be the sixth year that there are at least 100 international players in the league. The increase of international players even caused the spark of the updated format of the Rising Stars Game in 2015 from Rookies vs. Sophomores to USA vs. World.  The NBA is truly an international league now, a magnet for the world’s greatest players.  In this way, the NBA is a microcosm of the high-end US immigration system, which tries to attract the most talented and accomplished individuals from around the world.

Each international player who makes it to the level of the NBA or WNBA immigrates with one of a number of highly specialized work visas.  S/He will enter and work in the United States using either a P1 Athlete Visa, an O1 non-immigrant visa or an EB1 Extraordinary Ability Green Card.

The P-1A Internationally Recognized Athlete classification applies to an athlete or coach who is coming temporarily to the United States solely for the purpose of performing at a specific athletic competition as:

The O-1A Non-Immigrant Visa (and EB1 Extraordinary Ability Green Card) is for the individual who possesses extraordinary ability in the sciences, arts, education, business, or athletics, or who has a demonstrated record of extraordinary achievement in the motion picture or television industry and has been recognized nationally or internationally for those achievements.

To qualify for this EB1 visa, and athlete needs to demonstrate at least three of the following:

As the NBA begins its 75th year, here is your NBA Foreign All-Star Team:

Joel “The Process” Embiid took up basketball when he was 16 years old.  The son of a Cameroonian military officer, he was scouted at a Basketball without Borders showcase in Johannesburg, South Africa. Following that tournament, he was recruited to a high school in the United States.  Since that time, he has grown another 4 inches and combined his preternatural athletic ability and skill set to develop into the best Center in the NBA, an MVP candidate and one of its best social media Trolls.  He also happened to be really cool to my son and nephew when they met him following his tennis match in our local park. Joel Embiid may have been born and raised in Cameroon, but he is now an adopted son of the City of Brotherly Love.

Back to back Most Valuable Player, NBA Champion, and a force of nature, Giannis is nicknamed “the Greek Freak.”  He was born in Athens Greece, the son of immigrants from Nigeria.  His parents, as immigrants, could not easily find work, so Giannis and his older brother, Thanasis, helped by selling watches, handbags and sunglasses in the streets. In 2007, at the age of 13, Antentokuompo started playing basketball.

Although Giannis and three of his four brothers were born in Greece, they did not automatically receive Greek citizenship as Greek nationality law follows jus sanguinis, where citizenship is granted to those who have Greek parents (unlike the United States which grants citizenship to anyone born on US soil, also known as Jus Soli).  For the first 18 years of his life, Giannis could not travel outside the country and was effectively stateless, having no papers from Greece or Nigeria. He was eventually issued Greek citizenship on May 9, 2013, less than two months before the 2013 NBA Draft.

From humble roots and a difficult childhood, Giannis now sits on top of the world as the best player in the NBA, and a world champion.

There are many other international players who are NBA stars, including Nikola Jovic (Serbia), Bojan Bogdanovic (Croatia), Rudy Gobert (France), Al Horford (Dominican Republic), Damontis Sabonis (Lithuania), Dennis Schroeder (Germany) and Clint Capela (Switzerland).  There is also one international player who is absolute trash (Ben Simmons from Australia). Thanks in part to this international talent, the NBA continues to be the premier basketball league  featuring the world’s best players.