FROM BEIRUT TO BROAD STREET: HOW TACOS AL PASTOR TELL THE STORY OF IMMIGRATION 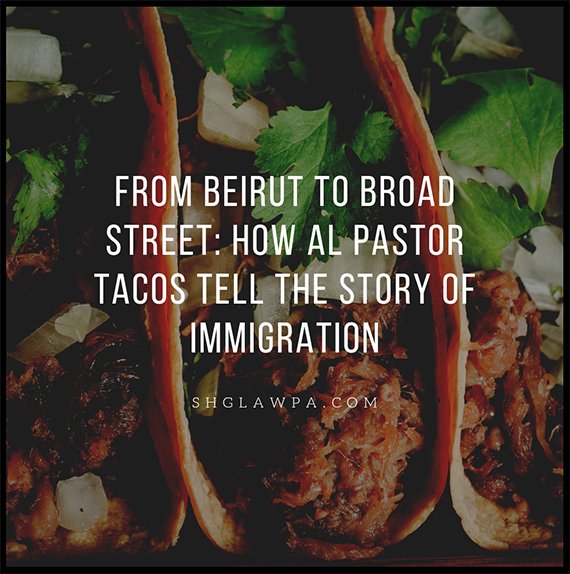 Last week, my wife and I were dining with our friends at Li-Beirut, a delightful new Lebanese BYOB in Collingswood.  As we were enjoying the delicious mix of mezze on our table, my mind started to drift, as it often does, to immigration and how interconnected our world can be.

Lebanon is a small country located on the eastern shore of the Mediterranean Sea. Despite its small size, it is a country rich in history and culture.  Once part of the Phoenician, Assyrian, Persian Roman, and Ottoman Empires, it is the site of some of the oldest human settlements in the world, including the Ports of Tyre, Sidon and Byblos, (reputed to be the world’s oldest continuously inhabited city).  It was not until 1920 that the contemporary state of Lebanon came into being.  It achieved its full independence in 1943.  Its rugged, mountainous terrain has served throughout history as a refuge for different religious and ethnic groups and for political dissidents. Lebanon is one of the most densely populated countries in the Mediterranean area and has a high rate of literacy. Despite its small size, Lebanon, and in particular its capital city Beirut, continues to serve as a busy commercial and cultural centre for the Middle East.  Its mix of cultures, bringing with them their culinary traditions, and its warm Mediterranean climate, have also helped to create a unique and delicious cuisine.

Migration from Lebanon to the Western Hemisphere began in the middle 1850’s, when Mt. Lebanon was the scene of several regional and international conflicts that led to civil wars, particularly between Maronite Christians and the Druze sects in 1840.  Subsequent waves of Lebanese immigration following the collapse of the Ottoman Empire, the end of the French Syrian Mandate, and the Lebanese Civil War in the 1980s.  In addition to the United States, many Lebanese immigrated to Brazil, Venezuela, Argentina, Colombia and Mexico.  The Lebanese diaspora took their rich cooking traditions with them to their adopted homelands.

Tacos al pastor are said to have been created in the 1930s in Puebla, Mexico, by Lebanese immigrants.  These immigrants migrated from the former Ottoman Empire due to a number of reasons such as evading military conscription, escaping violence, and searching for better economic opportunities.  These immigrants brought with them their cooking techniques using a vertical skewer, known as a spit or “trompo” with which they introduced the region to classic shawarma: roast lamb served on a flour tortilla or pita bread (In Spanish know as “pan árabe.”)  Soon pita bread was replaced with corn or flour tortillas, and this creation was then dubbed as tacos al árabes (“Arab Style Tacos”).

The technique of cooking meat on a vertical skewer would eventually evolve into tacos al pastor, but the main difference is that tacos árabes usually used lamb (eating pork, of course, being forbidden in Islam).  In addition, the meat in tacos al árabes isn’t marinated; it has a simpler salt seasoning, and it’s served with flour tortilla in place of wheat pita bread.  When the vertical skewer moved on from Puebla, the tacos al pastor as we know them today began to evolve: Marinated pork (with pineapple) replaced lamb on the spit, and cilantro and onions were added.  According to Chef Alex Stupak from the acclaimed restaurant Empellon Al Pastor “where the addition of pineapple came from remains one of “history’s most delicious mysteries.”

Fast forward to the present day.  Tacos al pastor is now part of the Mexican national cuisine and is enjoyed the world over.  The world associates these tacos as a Mexican dish and knows nothing of its Lebanese immigrant origins.  At the same time, Mexican immigration to Philadelphia, especially from the State of Puebla, has exploded in the past 20 years.  Much like the Lebanese immigrants who immigrated to Puebla in the 1930s, many Poblanos have migrated to Philadelphia to flee violence and unrest, as well as to seek out better economic opportunities.  Many Poblanos have found work in the City’s burgeoning restaurant and construction industries.  Go to any kitchen at any high-end restaurant in Philadelphia and you will find a Mexican, most likely from Puebla.  These immigrants are the backbone of Philadelphia’s famous restaurant industry and deserve more credit, better working conditions, and better pay for the work they do.  So many Poblanos have migrated to Philly that it has been nicknamed “Puebladelphia.”   Today, in the shadow of Pat’s Cheesesteaks (another great immigrant food story that we will explore in a future blog) in South Philly, are dozens of small Mexican restaurants, including the renowned South Philly Barbacoa and Tamalex, one of our favorite local Mexican restaurants.  Tamalex, whose owners hail from Puebla, has blessed our city with some of the region’s best Tacos Al Pastor.  These restaurants, and others like them, have added to the tapestry of our city’s dining scene.  In fact, there are so many great Mexican restaurants in the area, there is even a blog dedicated to them called Nachojawn, written by our friend Andy Brown.  For anyone interested in learning more about Philadelphia’s vibrant Mexican dining scene, I encourage you to read it.

The origin story of Tacos Al Pastor shows us how interconnected our world can be, the beautiful things that we can create when cultures and traditions mix, and when new ideas and people are given a chance.  Mexican cuisine is in debt to some enterprising Lebanese immigrants seeking a better life who landed in Puebla in the 1930s.  In turn, Philadelphia is a richer, more interesting and wealthier city thanks to the Poblano Mexican immigrants whose labor has powered our restaurant industry, who have helped repopulate our neighborhoods, and who now are opening small businesses, raising families, and creating opportunities in their adopted home.