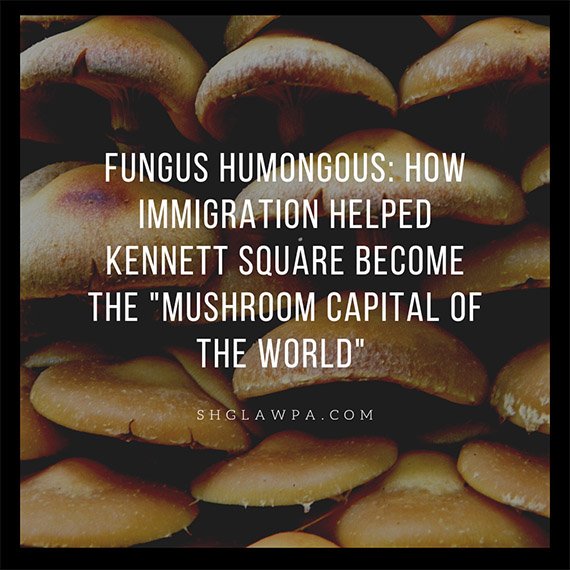 On September 11-12th, 2021, Kennett Square will celebrate its 36th Annual Mushroom Festival.  (SHG Immigration Law is one of the festival’s sponsors).  The theme for this year’s festival is “Rooted in the Community” as a way to celebrate Kennett Square’s mushroom industry and surrounding community.  Kennett Square is known as the Mushroom Capital of the World.  It is estimated that around 50% of America’s mushrooms come from Kennett Square and its surrounding communities.  The history of mushroom farming in this area goes back to the late 19th Century, and immigration has always been a central part of its story.

The story starts with a couple of Quakers, whose ancestors who were among the first European immigrants to settle in Pennsylvania.  Sometime in 1885, according to legend, two Quaker flower growers from Kennett Square were bothered by wasted space under their garden’s flower beds, so they thought of growing mushrooms there.  They traveled to England to collect mushroom spores and then brought them back to Kennett Square.

After returning with the spores, they hired some out of work Italian immigrants- laid off workers from nearby stone quarries- to handle the hard physical labor involved in cultivating mushrooms.  In the late 19th century, Italian immigrants, predominantly from the rural and impoverished areas of Sicily, Abruzzo and the “Mezzogiorno” area of Southern Italy, arrived in the United States in large numbers.  The reason for their arrival was complex, and each Italian family no doubt had their own unique story.  By the late 19th century, the Italian Peninsula had finally been united as one country, but the land and the people still were not unified.  Decades of political upheaval had left a legacy of violence, social chaos, and widespread poverty, especially in the rural south of the country that had once been ruled as the “Kingdom of Two Sicilies.”  As reports of opportunity and prosperity came to these impoverished regions, and as transatlantic transportation became more affordable, Italians heeded the call to immigrate to the new world.  Much like many Mexican and Central American migrants today, there were a significant number of single men amongst these immigrants, and many came only to stay a short time.  It is estimated that 30 and 50 percent of this generation of immigrants would return home to Italy, where they were called ritornati.  Between 1880 and 1920, approximately 4 million Italians had arrived in the United States, and they represented more than 10 percent of the nation’s foreign born population.

The majority of the Italian immigrants who arrived in this wave were farmers and laborers looking for steady work.  They found it on construction sites in big cities like New York City, San Francisco, and Philadelphia and on farms in places like Northern California.  There is a famous joke that was made amongst Italians from that time that goes something like this:

Much like Italian immigrants in the Napa and Sonoma Valley found labor in the vineyards, Italian immigrants in Kennett Square were employed constructing mushroom houses and cultivating mushrooms throughout the Brandywine Valley.  And, just like Napa Valley, many of these former laborers became successful business owners.  In Napa Valley, the names Ruffino, V. Sattui, Coppola, Gallo and Mondavi are now synonymous with wine making.  Likewise, in the Brandywine Valley, Italian Americans are still involved in Kennett Square’s mushroom industry.  One of the area’s largest mushroom farms, Pietro Industries, for example, is owned by the grandson of immigrants from Abruzzo.

In the 1950s, as the Italian labor force aged, some became owners and managers of their own mushroom businesses, or sought different opportunities.  However, the immigration story of mushrooms does not end there.  Italian labor in the growing houses was replaced by Puerto Rican workers, who were migrating to the mainland of the United States during this time to pursue better opportunities than were available on the island.  Puerto Ricans, of course, being United States citizens, did not “immigrate” in the legal sense, but left the island of Puerto Rico for rural Pennsylvania, which must have presented great cultural, linguistic, and socio-economic challenges for these new arrivals.

It is no secret that mushroom farming is grueling, difficult work.  Mushrooms are grown in long, windowless cinder block buildings.  They are grown in compost that consists mostly of horse manure, which, when wet and subject to heat, creates a very unpleasant smell that can stretch for miles.  So perhaps it is not surprising that by the late 1970s, the Puerto Rican workers began to organize, demanding “higher wages, overtime, compensation and improvements in their working conditions.”   As US citizens with the right to work and travel freely, Puerto Rican workers could seek protection under US labor law and collective bargaining.

Their efforts were met with strong resistance from growers, who systematically dismissed them and hired Mexican migrants, many from Guanajuato state and often recruited by word of mouth amongst the worker’s kinship groups.  Most of these migrants were single men, with or without work permits or visas. They left behind their families in Mexico and lived together in often ramshackle, often squalid “mushroom camps” provided by the growers.  Some of these camps were targeted for litigation by Friends of Farmworkers (now known as “Justice at Work,”) a non-profit law group.  The federal Immigration Reform and Control Act of 1986, which granted amnesty to undocumented immigrants who had lived in the United States since 1982, and the 245(i) and Legal Immigration Fairness and Equity (LIFE) Act of 2001 enabled many of thiese migrants to establish legal residence in the United States.  After obtaining their green cards, many sent for their wives and children back in Mexico, or returned to marry in Mexico and bring their spouses with them.  This helped to establish a permanent Mexican community in Southern Chester County.

The immigration story of Kennett Square now repeats itself, as some former Mexican laborers have risen to manage and own their own mushroom businesses or have founded construction, landscape and trucking businesses that cater to the mushroom industry.  Kennett is now also known for its Mexican Restaurants and Bakeries. As of the mid 2010s there were reportedly 6 Mexican owned mushroom growers, including Liberty Mushrooms, run by Martin and Norma Ortiz, from Toluca, Mexico.  Martin who came to the United States as a teenager in the early 80s. worked for growers in the Brandywine Valley, picking, packing, driving trucks, and learning how to cultivate shiitake mushrooms. In 2009, he opened Liberty Mushrooms.  Its Statue of Liberty logo is a shout-out to his American dreams realized.  People like the Ortiz family have given life and energy to this thriving corner of Chester County.  And as the children of former mushroom workers seek new opportunities, they are being replaced in the growing houses by a new generation of immigrants from places like Guatemala and Venezuela.  On my most recent visit to Kennett, I was pleased to discover a new Venezuelan “tienda,” or grocery store, on West Baltimore Pike launched by a family from Caracas who previously worked in the mushroom houses.  Another recent Venezuelan transplant has launched a local radio station called KennetticaRadio.com.  Kennett’s immigration story looks set to continue.