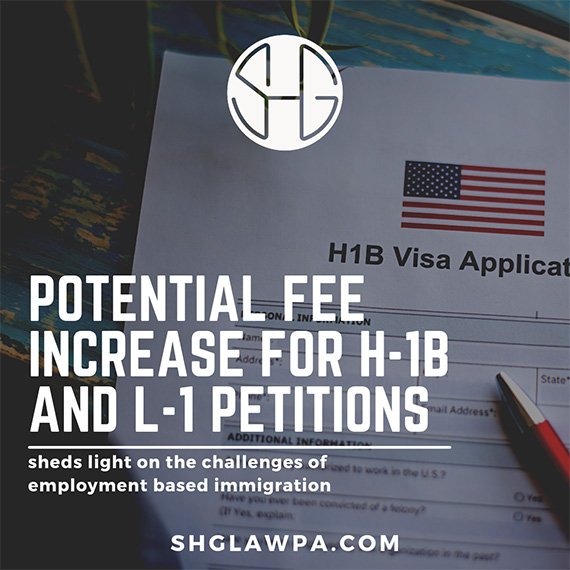 “Cheap labor” believers often forget to acknowledge the expensive fees that go along with filing H-1B petitions, or the large number of much needed job openings in their profession. H-1B visas could become more expensive if the House reconciliation bill becomes law, further challenging the belief that the H-1B visa holders are “cheap labor.”

Each H-1B visa petition would be subject to a $500 surcharge, according to the bill. H1-B visas are used by companies, especially in the computer and IT services industries, to bring highly qualified workers into the United States. In addition, the bill proposes increased fees for a number of immigration-related petitions.

Critical opinions of H-1B visas and employment-based immigration are often based on the inaccurate assumption that foreign-born scientists and engineers add no value to the United States or the country’s development, besides their willingness to work for less money. Despite the fact that the vaccines that saved the lives of many Americans from Covid-19, were developed by former international students, H-1B visa holders, and employment-based immigrants. Even some members of Congress who are immigration rights advocates suggest that allowing businesses to hire high-skilled international employees and sponsoring them to become permanent residents is essential to the nation’s technological and economic progress.

More often than not, coming to America as an international student and gaining H-1B status, or being hired directly on an H-1B visa, is a gateway to international talent looking to pursue the American Dream.  For many of these highly skilled individuals, the H-1B visa is the main opportunity under the U.S. immigration system to move to the United States permanently, start a career or have a family here. A new House bill will make it even more difficult and expensive for employers to file petitions for those talents to fulfill their ultimate potential.

This petition cost increase includes $800 for permanent residency sponsored by an employer, and a $250 fee for an F-1, or student visa, which is paid for by the educational institution. It also includes a $500 fee for employment authorization forms for spouses of certain non-immigrants, students seeking optional practical training, and adjustment of status applicants. This is why the proposed increase in H-1B filing fees feels like yet another barrier in the already complex H-1B application process.

Section 60004 in the House’s proposed bill state that the fees collected under Subtitle A shall be deposited into the general fund of the Treasury and may not be waived. The potential additional supplemental fees are proposed as follows:

• $500 for applications for employment authorization (Form I-765) filed by spouses of certain nonimmigrants, students seeking optional practical training, and applicants for adjustment of status

• $75 for each approved nonimmigrant visa.

Accordingly, legal expenses, filing fees, and responding to evidence requests can add up to $31,000 each time a company files an H-1B petition or an extension. Companies currently pay $460 for the basic application, the new $500 supplemental fee plus legal fees, $500 anti-fraud fee and $1,500 scholarship and training fee ($750 for smaller employers).

There is an additional $4,000 cost for employers with a high proportion of H-1B and L-1 visa holders, as well as $2,500 for premium processing of the petition, which most corporations opt for.

Employers are often willing to pay these hefty fees for a talented foreign worker, debunking the belief that H-1B workers are cheap labor. Regardless of the law, the Department of Labor H-1B continuously discovers that some companies are violating the minimum wage terms and paying non-U.S. employees smaller wages. Therefore, to argue companies hire H-1B visa holders because they are “cheap labor” is inaccurate and is merely an attempt to devalue H-1B professionals as human beings and disregard their talents.

If the bill passes the US House of Representatives, it will speed up the process of obtaining permanent residency for thousands of people who are waiting for a green card. If passed, these proposals could be among the most important immigration reforms implemented by the U.S. administration in recent years.

If the House reconciliation bill becomes law, hiring an H-1B visa holder will become more expensive. Because an H-1B visa is generally the only viable method to recruit high-skilled international individuals, including international students, to work long-term in the United States, employers will pay the additional premium. With over a million job openings in the computer technology industry alone, it is discouraging that Congress is potentially complicating the hiring process and immigration opportunities, instead of making it easier for such needed positions.