Haitian refugees denied at the US border: Why are different groups of people fleeing dangers in their countries treated differently? 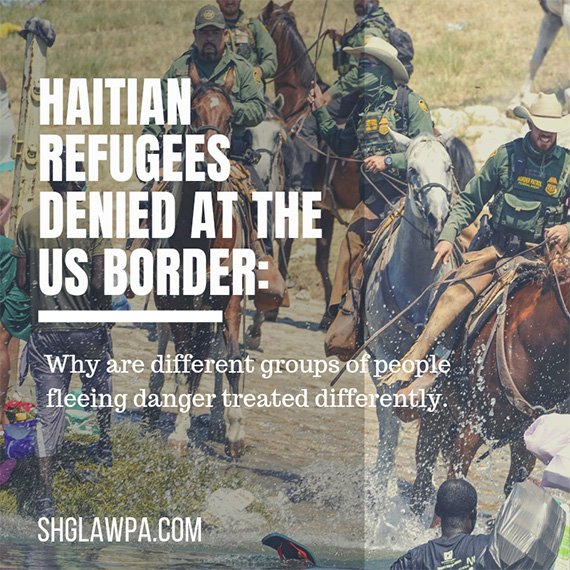 Recent images of Afghans evacuated to the US being welcomed at American airports, and Haitians at the US-Mexican border being beaten back by Border Patrol agents on horseback to block them from seeking asylum protection in the US, have raised questions about US policies and laws regarding refugees and asylum seekers. Why are different groups of people fleeing dangers in their countries treated differently? Is it legal to summarily deport Haitian asylum seekers to Haiti without affording them any opportunity to present their claims? This post will look at asylum law, specifically US policy towards asylum seekers at the southern border, while a second post will look at refugee admissions and ‘special immigrants visas’ for certain Afghans.

Our system of refugee protection is based on the Refugee Convention of 1951 and its 1967 Protocol. These post-WW II treaties define ‘refugees’ as persons outside of their country who need protection because of a well-founded fear of persecution on account of race, religion, nationality, membership in a particular social group, or political opinion. US law incorporates this definition of refugee and explicitly states (in section 208 of the Immigration and Nationality Act): “Any alien who is physically present in the United States or who arrives in the United States (whether or not at a designated port of arrival…) irrespective of such alien’s status, may apply for asylum….” Thus, despite what is sometimes reported in the media, it is completely legal for persons who reach a US border to ask for asylum protection there, and under the law their right to seek asylum does not depend on whether they have a visa or other prior authorization to enter the US.

In March 2020, soon after the outbreak of the covid pandemic, the Trump administration used an obscure law to expel asylum seekers at the US-Mexican border on the pretext that they would present a public health danger. This order, under Title 42 of the US Code, was seen by many as furthering Trump’s goal of ending asylum protection in the US. (An earlier Trump administration policy, called ‘Remain in Mexico,’ forced many asylum seekers arriving at the US-Mexico border to return to Mexico to await their US Immigration Court asylum hearing.) The Biden administration has continued to expel asylum seekers under Title 42. Recently about two thousand Haitians have been deported to Haiti from the border, and a much larger number has been returned to Mexico.

This policy violates US law and our international treaty obligations, which prohibit returning refugees to a country where they face serious threats to their life or freedom. Known as ‘non-refoulment,’ this is the core principle of refugee law. The US government knows that serious threats to life and freedom await those they are expelling to Haiti. In August 2021 Temporary Protected Status (TPS) was extended for Haitians living in the US at that time. In announcing TPS the government wrote that “Haiti is grappling with a deteriorating political crisis, violence, and a staggering increase in human rights abuses.”

On September 16, a federal judge found that the public health laws under Title 42 do not authorize the expulsion of migrants. He issued an injunction blocking the policy against migrant families; single adults are not affected. Implementation of the judge’s order was delayed for 14 days, and the government has appealed the decision. So, it is unclear whether or for how long expulsions under Title 42, and this illegal denial of the right to apply for asylum, will continue.