HISTORY AND FUTURE OF DACA, Part I 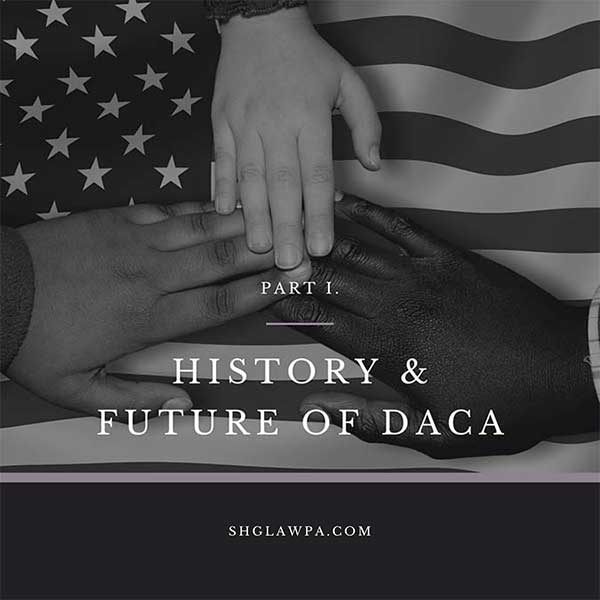 This will be a two-part story.  In the first part, we will explore the history and development of Deferred Action as a Childhood Arrival (commonly referred to now as “DACA”), its requirements, the actions the Trump Regime took to dismantle the program, and the current litigation that has led the future of DACA to the Supreme Court, where we await a decision on the future of the program.  In the second part of the story, to be published in a few days, we will explore options for DACA holders to address their immigration status should the Supreme Court side with the Trump Regime and find that the Regime’s actions in terminating the program are Constitutional.

DACA provides temporary relief from deportation and work authorization to qualifying young immigrants who arrived in the United States as minors.  After several failed attempts to pass the DREAM Act, a federal bill that would have provided a path to citizenship to qualifying young immigrants, the announcement of the DACA program provided temporary but welcome relief to thousands of young immigrants who grew up in the United States.  It also opened up a spigot of opportunity that flowed to thousands of young Dreamers to pursue higher education, better job opportunities and deepen their social ties to this country.

How Did DACA Come About?

Beginning in the late 90s, following the adoption of a restrictive immigration reform called IRAIRA, thousands of young children, many (but not all) from Mexico and Central America, were brought to the United States by their undocumented parents and relatives.  Before IRAIRA, it was common for Mexican and Central American “undocumented” migrant workers to cross the border, work in the United States for a few years, return to their families in back home with the money they saved during their time in the United States, then if the need arose, repeat the process.  After IRAIRA, the legal consequences of repeated border crossings became a lot more severe and Customs and Border Patrol started to apprehend and process border crossers at a higher rate.  Accordingly, instead of returning to their home country after a period of work as they had before, undocumented workers would send for their families to live with them in the United States or cross with their families in tow.  Thousands of young foreign children with no legal claim to US citizenship, therefore, grew up in American towns and cities and attended American schools.  Oftentimes these children had no memory of their home country, having been brought to America as infants or toddlers and living their entire formative years in the United States.  These children went through the US secondary education system and were socialized just like any other American child.  They would graduate high school with their American classmates, oftentimes exceeding, only to find that their pathway to higher education and employment was blocked by their immigration status.  It is estimated that there are over 1.8 million children and young adults living in the United States in this manner.

DACA was born in 2012, as political action groups such as United We Dream, Dream Activist, and Dream Action Coalition, and other immigration advocacy groups put pressure on the Obama Administration to do something for these young people who now found themselves, through no fault of their own, undocumented and second class citizens in American society.  Congress had been debating the DREAM Act, which would have given these children a pathway to citizenship, for many years.  But Republicans and Democrats have never been able to make a Bi-Partisan agreement on the DREAM Act, and it has languished in Congress for over a decade.  Movement leaders believed that Obama, who was in the midst of his reelection campaign, had the power to stop deportations on a larger scale than he had up to that point.

In light of Congress’ inaction and political pressure from these outside groups, in addition to the fact that Barack Obama is a good man, deft politician, and the coolest person to ever grace the Oval Office, Obama used his powers in the Executive branch and issued an executive order establishing the DACA program for these promising young immigrants.  By establishing DACA and bypassing Congress, he decreed that under his powers to enforce the immigration laws, this certain class of individuals would not be subject to immigration enforcement.  His use of executive power instead of passing legislation through Congress planted the seeds for the Trump Regime and his band of White Supremacists to try to revoke DACA in later years.

DACA: Its Requirements and Implementation

In order to qualify for DACA, recipients needed to meet several requirements and provide documentation in support of these requirements. They had to: a) show continuous presence in the United States since June 15, 2007; b) meet certain age limitations (under 31 years of age as of June 15, 2012, arrived in the United States before age 16, and at least 15 years old at the time of the first application); c) physical presence in the United States on June 15, 2012; d) have no lawful status; e) be enrolled in or graduated from high school (which could alternatively be a GED certificate) or be an honorably discharged veteran from the Armed Forces); and f) show good moral character as evidenced by no convictions for a felony, significant misdemeanor, or three or more minor misdemeanors. As of this writing, nearly 700,000 individuals are active recipients of DACA.

By applying for DACA relief, applicants trusted the US government with numerous personal details, including their residential history, school location, and workplace. The application required a fee of $495, including biometrics.  Recipients were required to renew their work permits every two years in order to maintain their ability to stay in the country without fearing deportation and to work legally.

Why is the Trump Regime trying to End DACA?

On September 5, 2017, the Trump Regime, through then Attorney General and Arch-Racist Jeffrey Sessions, announced that it would end DACA.  A series of Federal lawsuits and injunctions followed, which permitted current DACA holders to renew their benefits, while prohibiting new applicants from filing initial DACA applications.  A timeline of various DACA litigation can be found here.  The main legal argument that supporters of DACA have made is that the Administration’s decision to terminate DACA was “arbitrary and capricious,” in other words, served no other purpose except to hurt a class of people for no reason.  Other arguments in support of DACA injunctions were that the Administration terminated the DACA program without going through the necessary Administrative Procedures Act (APA) process to explain how and why they were terminating the program.  Legal arguments in support of the Regime’s position are that the DACA program was an illegal use of President Obama’s Presidential powers, so that the Trump Regime now has the power to terminate it, regardless of the innocent lives this decision would destroy in the process.  As of this writing, DACA holders are still filing and receiving their two year renewals, often within a week or two of filing.

The Supreme Court held oral arguments in this matter on November 12, 2019.  Savvy court observers who listened to the arguments got the sense that the Conservative majority would find in favor of the administration and say that their decision to end DACA program is Constitutional. A decision should be coming any day now, before the Supreme Court ends its session at the end of June or early July.  However, shutdowns and delays associated with the COVID-19 outbreak may change that schedule.

Why Should you Care?

If you love America, hate racism, and you believe in the American promise and the myth that we tell ourselves that this country is the Land of Opportunity, then you will support DACA holders and their struggle.  If you are a racist troll who hates America and wants to see the American experiment fail because you are angry about how mediocre your life turned out, then maybe you will not support DACA.  DACA holders really represent the mythical “American Dream” that people love to preach about but many seem to never achieve.  Over the past 8 years, I’ve represented DACA holders who went on to become Doctors, Nurses, military members, chefs, computer programmers, teachers, husbands, wives, parents, taxpayers- productive American citizens.  Last week, Illinois Senator Dick Durbin was even singing the praises of one of our own DACA clients, Mariana Galati, on the floor of the U.S. Senate.  Mariana was brought to the United States from Mexico when she was 4 years old.  She survived Lupus, graduated high school in Camden, New Jersey, takes care of her autistic US citizen brother, and is now studying to be a nurse.  She is currently working in a COVID-19 testing center, putting her life on the line every day.  See Senator Durbin’s impassioned speech about Mariana here.  Her story is just one example of the contributions that DACA holders are making in our society.  Denying rights to DACA holders will hurt the economy in the middle of a Pandemic and economic depression.  There are over 27,000 DACA holders who are in the medical field, who would now be unable to contribute important medical services in the middle of the COVID-19 pandemic. More importantly, terminating DACA will also leave a stain on the soul of this country, turning 700,000 productive, innocent human beings, into targets for immigration enforcement.

The materials available on this website, including third-party links, are provided for general informational purposes only. They do not constitute legal advice and we make no representations as to the accuracy or completeness of any information on this site or found by following any link on this site. This website is not intended to create an attorney-client relationship between you and Philly Immigration Lawyers. You should not act or rely on any information available in or from this website without seeking the advice of an attorney.© Philly Immigration Lawyers. All Rights Reserved. The materials and images found on this site, produced by Philly Immigration Lawyers are copyrighted and shall not be used without advanced permission. For permission, contact us at [email protected].