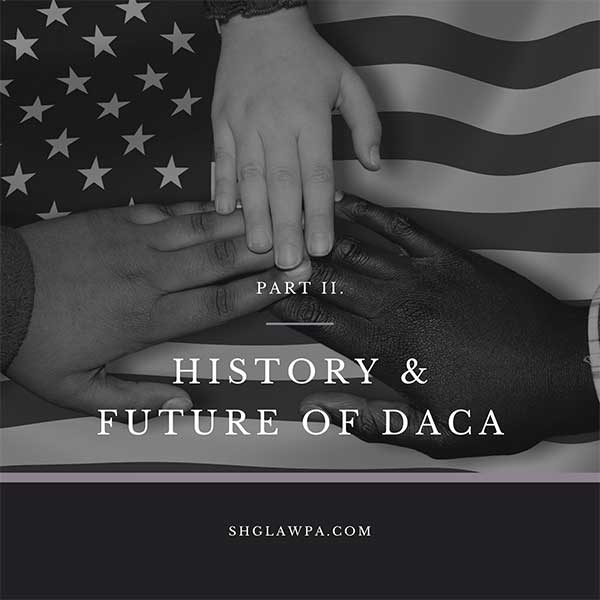 Since our first installment of the History and Future of DACA, quite a lot has happened.  On June 18th, the Supreme Court, in a narrow 5-4 decision, held that the Trump administration illegally terminated DACA.  Writing for the majority, newly woke Chief Justice John Roberts, said that the administration acted in an arbitrary and capricious manner when they decided to terminate the DACA program.  SCOTUS also ordered the Trump administration to not only permit renewals for current DACA beneficiaries, they told the administration that they needed to restore the entire program to its pre-2017 form.  This meant that USCIS should also accept initial DACA filings for first time applicants who missed out on the program prior to the Trump administration’s attempted rescission.  An estimated 66,000 individuals became eligible for an initial DACA application, while nearly 700,000 current DACA recipients could rest easy knowing they would maintain their status during a time of great economic and societal upheaval.

Immediately following this decision, USCIS and the Department of Homeland Security, instead of executing the laws they are sworn to uphold, took the unprecedented step of issuing a statement in defiance of the Supreme Court’s decision.  Acting USCIS Director Chad Wolf, straight from an all-night kegger at the Alpha Beta House, wrote “The DACA program was created out of thin air and implemented illegally.  The American people deserve to have the Nation’s laws faithfully executed as written by their representatives in Congress.”  Then, clearly devoid of irony, Chad, who works for an administration that for example, is currently trying to dismantle the Affordable Care Act and rob millions of healthcare in the middle of a global pandemic, had the cojones to say that the American people deserve laws “not based on arbitrary and capricious decisions of a past administration.”

Chad’s pledge brother Ken Cuccinelli, whose title is the Senior Official Performing the Duties of the Deputy Secretary of Homeland Security, and speaking on behalf of an administration that put kids in cages, that extorted a foreign ally to dig up dirt on a political opponent, and who violate the Constitution as often as my children eat Honey Nut Cheerios (read: everyday, twice a day, in the morning and at the exact moment I’m trying to put them to bed), had the audacity to say “The Supreme Court’s decision is an affront to the rule of law and gives Presidents power to extend discretionary policies into future Administrations.”   This statement, again, came from an administration that announced a blanket ban on entire classes of people on account of what country they were born, that targeted social media companies for fact-checking the President, and who signed an executive order protecting White Supremacist Monuments.  Following these statements, USCIS refused to give guidance or accept new DACA filings, took their toys, and went home.  The agency and their rogue commanders, in effect, disobeyed the Supreme Court’s order to reopen the DACA program.

Last week, during a virtual hearing before the U.S. District Court in Maryland, U.S. District Judge Paul Grimm ordered the government to comply with court directives to restore the DACA program and said that the administration must clarify the program’s status to the public within 30 days.

Yesterday, July 28th, the Trump administration clarified the program’s status by announcing they would reject initial DACA filings and grant current DACA renewals for only one-year increments (They were previously granted in two-year increments).  This announcement is basically a middle finger to the Supreme Court, to young people who missed out on the first round of DACA because they were too young to qualify at the time, and to existing DACA holders, who will now have to renew their status and pay government fees annually.

I don’t think this is going to be the end of the story.  I believe that stakeholders in the DACA litigation will file an injunction against the Trump Administration and this new memorandum. I believe that USCIS may be forced to comply with the Supreme Court and accept initial DACA filings sometime in the near future.  Accordingly, I may have to update this blog or post a History and Future of DACA III in the next few weeks.

The materials available on this website, including third-party links, are provided for general informational purposes only. They do not constitute legal advice and we make no representations as to the accuracy or completeness of any information on this site or found by following any link on this site. This website is not intended to create an attorney-client relationship between you and Philly Immigration Lawyers. You should not act or rely on any information available in or from this website without seeking the advice of an attorney.© Philly Immigration Lawyers. All Rights Reserved. The materials and images found on this site, produced by Philly Immigration Lawyers are copyrighted and shall not be used without advanced permission. For permission, contact us at [email protected].