Immigration and Racial Geopolitics – What Can the Ukrainian Crisis Teach Us? 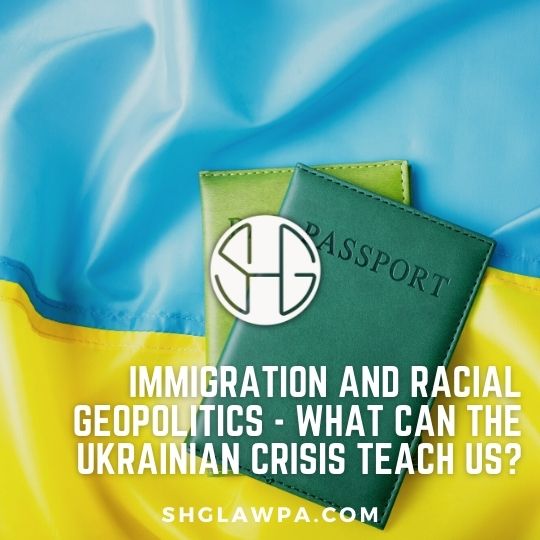 The United States and Europe historically favor white immigrant and refugee groups. Enshrining some coagulated, indiscriminate whiteness, the West has pushed global immigration to the nexus of racial politics. From each corner of the historically and racially privileged, we pull from those who fit neatly into the carefully curated “us.” Those who we see ourselves in earn the right to live. The others are left to perish, their persecution too foreign for our tolerance. Whether American interdiction of Haitian arrivals or the French subjugation of Muslim migrants, persecuted people of color rarely stand a chance at salvation. Policymakers know this fact and wrote the United Nations’ 1951 Refugee Convention to address it. The treaty grants the right of refuge as a human right; it is universally endowed. Signatories cannot decide who they accept. And yet, we watch administrations make that choice when immigrants and refugees of color attempt to enter the U.S. and Europe. The Western embrace of Ukrainian migrants fleeing the Russian invasion exemplifies these racial geopolitics. More than 6.9 million Ukrainians have been welcomed into new countries as of June 1st, where they are met with necessary accommodations, including food, shelter, and guidance. Their outstanding support should be an important reminder of the life sacrificed in its absence.

As soon as Ukrainians arrive at the Polish border, they are allowed to enter. At the crossing, they are provided with sustenance and sanctuary. They then receive guided travel to their temporary places of residence. If a Ukrainian refugee lands in Germany, they will face minimal constraints. Reception centers have sprung up across Berlin specifically for Ukrainian arrivals. Likewise, the Deutsche Bahn decision to grant free public transportation access across Germany increases the options available to Ukrainian migrants, who benefit from a three-year protection policy throughout the European Union. Canada, too, promised to provide visas to an unlimited number of Ukrainians who wish to settle there temporarily. More than 50,000 Ukrainians have also found refuge in France without an admissible visa status. Lastly, the American “Uniting for Ukraine” initiative offers a two-year parole period for Ukrainians arriving in the US, with those at the border receiving unprecedented processing rates. Ukrainians meeting the Tijuana border receive special humanitarian admissions, housing inside a sports complex previously barred to other immigrant groups, internet access, and official transportation to appropriate ports of entry.

Meanwhile, the Polish authorities continue to build a wall only miles from their border with Ukraine to prevent the entry of Asian migrants. Germany has begun unduly evicting Afghan refugees fleeing the Taliban to ensure accommodations for Ukrainians. Syrian, Afghani, and Guinean immigrants in France experience abuse at the border, struggle to receive legal status, and fall prone to eviction and daily harassment by authorities.  Syrian immigrants report widespread and official discrimination in Canada and face increasing barriers to entry. The United States administration has established its “extreme vetting process,” nearly impossible to complete without an attorney; simultaneously, the nation has slashed the volume of Syrian refugees it will accept. While authorities provide chauffeurs for Ukrainian refugees at the US borders, immigrants fleeing economic and political violence in Haiti and Latin America have been removed from Mexico or had their visas revoked when the government discovered their intent to approach an official border crossing and seek asylum. The differences in treatment afforded to Ukrainian migrants and refugees of color are striking and evident. Ukrainians are welcomed and made to feel an immediate sense of belonging. Refugees of color are often rejected and, if admitted, struggle with limited support to make their homes abroad.

Although these two polar images characterize the immigration processes experienced by each group today, the conflicts look much more alike. The images showing the devastation of Ukraine’s urban areas look eerily similar to those of aerial bombardment in Syria. Haitian people have experienced hurricanes, earthquakes, and their president’s assassination. People in the Northern Triangle of Central America flee an intense drug war. We see women and children running, terrified, clutching onto whatever they can manage to free from their homes; at the crux of these images is human suffering. Yet the Ukrainian crisis has garnered support where Middle Eastern, African, and Latin American strife has not.

The situations certainly look different. Is the policy different, too?

Legally and politically, Ukrainians face fewer barriers to entry and stability. Firstly, the EU’s Dublin Convention has not imposed the same regulations on Ukrainians as it did on Middle Easterners and North Africans during the 2015 immigration waves. The convention requires the country that first registers an asylum seeker to administer their paperwork and distribute housing. In 2014, Syrian and North African refugees poured into Greece, a nation unequipped to provide such accommodations. This inability led to a forcible and disorganized redistribution of these groups throughout Europe, with refugees living under constant fear of repatriation. Fortunately for Ukrainians, their westward neighbors planned ahead this time to organize and register the unprecedented flow of Ukrainian immigration. The convention’s decrees have also been applied with much more flexibility to avoid inflicting the struggles of relocation upon Ukrainians seeking refuge.

Under the EU’s “temporary protection directive,” any Ukrainian national who flees the invasion, plus their partners and children of any nationality, may receive permission to remain in any EU country for at least one year. Ukrainian refugees will also have permission to enter the European Union’s labor market. The 2014-2015 refugees had no such rights.

Ukrainians arriving at the United States’ southern border are being allowed into the States at a rate unbeknownst to most other immigrants, too. Their process to enter the US from Tijuana—the most common point of entry—can take hours or days, whereas immigrants from Central America, Haiti, Africa, and the Middle East have been waiting for months—even years—in Mexico. Most Ukrainians are granted a special legal exception to the Trump-era pandemic policy that expelled almost all immigrants at the border. As recipients of humanitarian parole, Ukrainians otherwise ineligible for entry are allowed into the United States for “urgent humanitarian reason or significant public benefit.” Humanitarian parole is notoriously difficult to obtain; most immigrants and asylum-seekers do not qualify, and even if they do, it is challenging to prove so without an attorney. Ukrainians have received this exception with exceptional ease.

Ukrainians with sponsors can also fly to the US and apply for humanitarian parole, which, if approved, allows them to live and work in the country for up to two years.  Furthermore, Customs and Border Protection (CBP) opened a pedestrian crossing that remains closed to the general public to increase the rate at which border officers can process Ukrainian refugees. Ukrainians arriving at the United States borders have not had to fight to validate their humanity. They have not had to fight to validate their right to survival. We must treat non-white refugees with the same human grace.

We know what it looks like for a national administration to meet refugees with dignity and humanity. The compassion afforded to Ukrainian arrivals should be afforded to refugees of diverse racial and religious backgrounds. While countless stories exist of the US and Europe favoring white, politically-aligned immigrants and refugees, room for significant progress remains when we agree to institutionalize humanity’s universality.