THIS LAND IS MY LAND: FROM WONG KIM ARK TO KAMALA HARRIS, BIRTHRIGHT CITIZENSHIP AND THE 14TH AMENDMENT 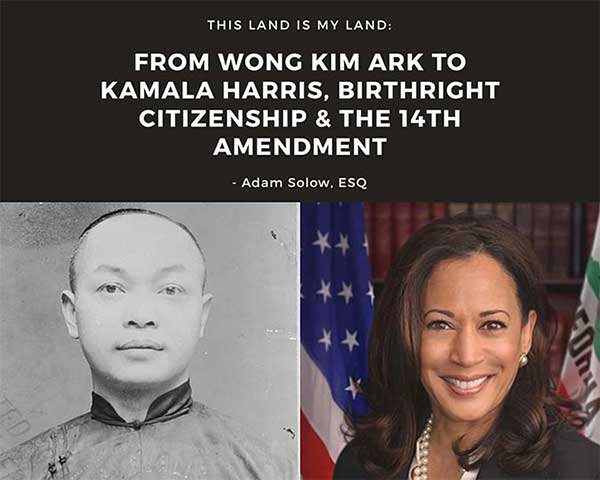 Last week, as Not My President started the inevitable and desperate ‘birtherism” arguments against Kamala Harris, my mind started racing back to the fall of 2005, when I was a 3L at Villanova Law School and attending the great Bill Stock’s immigration law class.  In one of his first lectures, Bill had given an historical overview of immigration law jurisprudence, which began to develop in the late 1800s in the wake of the Chinese Exclusion Act.

History of the Chinese Exclusion Act

Before the 1800s, there was little immigration from Asia to the U.S. During the 19th century, however, leading up to and following the Civil War, the western United States experienced mass migration of immigrants from several Asian countries, particularly China. Multiple factors triggered this wave of immigration. Fresh off their slaughter and subjugation of Native People’s in the west, Whypipo next turned their eyes to developing their new conquest.  With slavery abolished they needed to exploit someone’s labor, so now for the most part, in the west, the Chinese won that prize.  In 1848, gold was discovered in California and throughout the 1850s, Chinese immigrants were recruited as a major source of labor for the U.S. gold mines. Many Chinese immigrants also came to the U.S. during this period to escape the Taiping Rebellion, a large-scale civil war that encompassed most of Southern China. In the 1860s, Chinese workers were recruited in large numbers from both China and the U.S. western mining industry to help build the Central Pacific Railroad’s portion of the Transcontinental Railroad. During this time, Chinese laborers were also hired by the agricultural industry in California, which was suffering from severe manpower shortages and needed skilled farm workers.

As the Depression of 1873 took its toll on white working men, they began to look for scapegoats (Wow this sounds familiar.)  Chinese laborers were an easy boogeyman. Mob violence, arson and overt racist derision swept through California, powered by slogan “the Chinese must go.”  In response to economic fears, primarily in California, the U.S. Congress passed the Chinese Exclusion Act of 1882, which restricted Chinese immigration. The Chinese Exclusion Act marked the first time the U.S. Congress restricted an immigrant group on the basis of race. Congress actually has plenary power over immigration, so it is legal and Constitutional to restrict immigration from certain countries.  This is why, even today, Chinese or Indian nationals in skilled worker visa categories have an over decade long wait for their green card.  Or why Mexican nationals currently need to wait approximately 20-25 years for some types of family re-unification visas.

But this plenary power to restrict inbound immigration from China that was not enough for the building anti-Chinese wave. Thousands of children had been born to Chinese parents in the United States and birthright citizenship was the next target, just as some politicians are attempting today. Donald Trump has long denounced what he and other immigration foes call “anchor babies,” whose parents enter the country illegally just to make sure their children enjoy the benefits of citizenship.

Enter Wong Kim Ark. Wong was born in San Francisco in 1873, into the increasingly hostile environment of the exclusion era, a time of undisguised racism, that made no effort to hide behind euphemisms.  By all accounts, he was just a regular dude, a cook, father and husband, and had no idea that his legal case would change the course of U.S. Constitutional history.

The 14th Amendment to the Constitution was ratified on July 9, 1868, and granted citizenship to “all persons born or naturalized in the United States,” which included former slaves recently freed. In addition, it forbids states from denying any person “life, liberty or property, without due process of law” or to “deny to any person within its jurisdiction the equal protection of the laws.” By directly mentioning the role of the states, the 14th Amendment greatly expanded the protection of civil rights to all Americans and is cited in more litigation than any other amendment.  Originally adopted after the Civil War to protect the rights of freed slaves, the 14th Amendment has exponentially expanded the protection of civil rights for all Americans over the past 150 years.  It’s been cited in more litigation than any other amendment to the U.S. Constitution, and has been at the center of many of the most famous Supreme Court decisions.

Wong, had been denied re-entry to the United States after a trip abroad.  The Customs official (in those days there was no “Immigration” officials as we know them today, said he was not a US citizen and, citing the Chinese Exclusion Act, barred his entry.  Wong asserted his right to enter the U.S. as a natural born citizen.  He challenged the government’s refusal to recognize his citizenship, and the Supreme Court ruled in his favor, holding that the citizenship language in the Fourteenth Amendment encompassed the circumstances of his birth and could not be limited in its effect by an act of Congress.

The majority opinion was issued on March 28, 1898. For Justice Horace Gray, this was an open and shut case.  History and law, he wrote, “irresistibly lead us to these conclusions: the Fourteenth Amendment affirms the ancient and fundamental rule of citizenship by birth within the territory, in the allegiance and under the protection of the country, including all children born here of resident aliens…The Amendment, in clear words and in manifest intent, includes the children born, within the territory of the United States, of all other persons, of whatever race or color, domiciled within the United States.”  Wong Kim Ark was a U.S. citizen.

Accordingly, Kamala Harris is clearly and unequivocally a U.S. citizen and the jurisprudence surrounding this issue has been settled for over 120 years (ironically this decision came out around the same time 45’s grandfather, an immigrant himself, was opening his first Alaskan brothel from which he would mint the family fortune)

What became of Wong Kim Ark?

The United States v. Wong Kim Ark decision, while a major precedent, did not materially improve the life of Chinese citizens living in the United States and the Chinese Exclusion Act remained in effect up until the middle of World War II.  Eventually, Wong Kim Ark went back to China, never to return to the land of his birth, and I can’t say I blame him.  His son, Yoon Jim Wong did settle in America but didn’t recall much of his father’s story.  Only fragments of the story had apparently been passed down to his children and grandchildren.  In the late 1990’s Wong’s great-granddaughter Alice explored the history of her family and her “famous” relative.  She came to the conclusion that Wong was “just a regular guy.  He just wanted to do what he thought was right.  He wanted to fight for what he thought was his right.  And so you just do what you have to do.”  Indeed.The materials available on this website, including third-party links, are provided for general informational purposes only. They do not constitute legal advice and we make no representations as to the accuracy or completeness of any information on this site or found by following any link on this site. This website is not intended to create an attorney-client relationship between you and Philly Immigration Lawyers. You should not act or rely on any information available in or from this website without seeking the advice of an attorney.© Philly Immigration Lawyers. All Rights Reserved. The materials and images found on this site, produced by Philly Immigration Lawyers are copyrighted and shall not be used without advanced permission. For permission, contact us at [email protected].