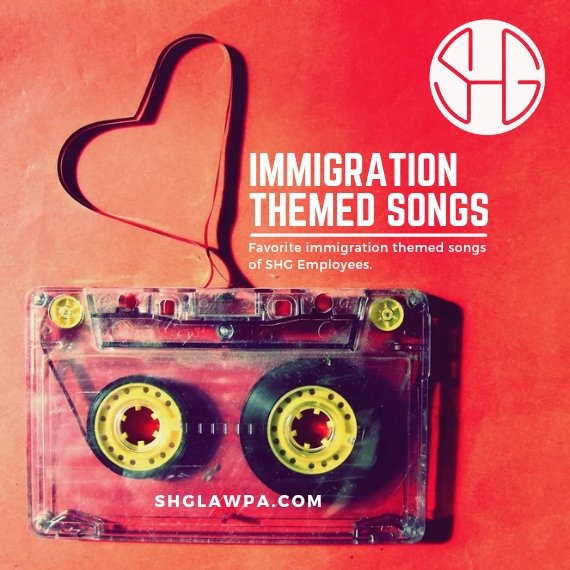 Music has the power to create strong emotional responses across cultures, races, religions and political opinions.  Music can evoke thrills, joy, sadness, longing, love (sometimes all within the same song).  This month, we asked our team to share their favorite immigration themed songs, the emotions they feel when they listen to these songs, and their favorite lines from each song.  Here are their choices with links to the songs:

It sings of an individual that is “mojado” (slang for illegal entry, literally “wet” from crossing the Rio Grande) three times. To get to the US he crosses three separate borders from his central American motherland. At each border, he has to cross a river because he does not have documents to enter legally. The individual reflects on the difficulty of his journey and the dangers he faced along the way. One of those dangers included his “foreignness” while crossing through other Latin-American countries. He is seen and treated as a lesser. Enduring harassment and near-death experiences, his troubles continue as he almost dies in the desert of Arizona. Finally, he made it to the US and was able to establish a life here. His American dream came at the cost of every single mile of his 2500 mile journey. A necessary sacrifice in search of a better life. It is a homage to those that entered into US wet as they crossed a river at the border – to those seeking a better life and the ones who may have lost it along the way.

This song and accompanying video displays the horrors of family separation caused by deportation.  “Un besito mas,” one final kiss, before one’s parent is deported from the United States.  I’m a fan of this artist who in this song and video shares with us her own experience growing up in America, seeing her family deported, while she, a Mexican-American, stayed behind after their deportation.  Although her story is tragic, it shows how she built herself up and became successful even after her family was separated, which is why it is my favorite immigration themed song.  The video also has statistics explaining that most undocumented immigrant adults have lived in the United States for an average of 12.7 years, and 4.1 million children of undocumented parents were US citizens, that losing a parent to deportation has consequences on these children’s mental well-being, including high rates of anxiety, depression, fear, attention problems, and rule-breaking behaviors.

“I know that you didn’t want to leave,

I know that you wanted to stay.

I will come to see you, one day, wherever you may be,

just save for me one more little kiss.”

Family members, resigned but not happy, take their loved ones to the airport. This song entitled “Los que se Quedan, Los que se Van” (Those who Stay, those who Go) is my favorite immigration themed song which describes exactly the feelings of thousands of Venezuelans who have no other choice but to leave not only their country but the Home they love.  It talks about how the Venezuelans have a deep love for their country, but cannot stay, and how all of their friends have scattered all around the world simply to survive.  And that one day they hope to return home (“Algun dia volveran”).

25 kilos of clothes and a passport summarize the whole life of an immigrant. Some may think that it is easy to leave your country. However, it will never be easy for a person to leave a place that you never want to leave.  Behind you are leaving family, friends, loved ones that we don’t know when we will see again, not to mention our beloved pets and our daily activities. The rage came to me and I reflected it with tears when I saw my suitcase ready. I miss my home in Margarita Island in Venezuela but I’ve learned that there is hope for the future and I’m certain that there will be better times ahead.

Nassam Alayna El Hawa is my favorite immigration themed song. This song played in every car, every house, every coffee shop, every restaurant and every morning at my school. Fairuz’s music is the soundtrack of a typical Middle Eastern morning. Growing up, I would hear this song every day, everywhere, to the point where it became white noise. Now, I am six thousand miles away from my hometown, and I can’t help but think of this song every time I think about home. The absence of it, not hearing it in every corner when I wake up, or go to work in the morning is a reminder that I am in a completely foreign place. The air is a different breeze, the city noise is a different song, and here I am, longing to go back home, as Fairuz’s Nassam Alayna El Hawa plays in the background.

This is my favorite immigration themed song because it represents those immigrants who leave their homeland pursuing their dreams of a life with better material conditions, but they don’t lose their identity along the way.

‘Hoy me voy pal norte sin pasaporte, sin transporte a pie, con las patas’. (Today I’m going north without a passport, without transportation on foot, with legs”).  This line is kind of funny and sad at the same time, immigrants go through a lot of troubles to cross the border, they risk their lives even to reach this dream of having opportunities to achieve something.

I like this song because it discusses American hypocrisy towards immigrants.  How a country founded and built by immigrants (most importantly enslaved African labor), and whose economy is sustained by immigrant labor and energy, has demonized and scapegoated immigrants.

You claim I’m stealing jobs though
Peter Piper claimed he picked them, he just underpaid Pablo
But there ain’t a paper trail when you living in the shadows
We’re America’s ghostwriters, the credit’s only borrowed

It is a very emotional song, it makes me cry when I listen to it, because I have seen up close all my friends, part of my family and myself, leaving my country with just a suitcase to look for a better future.

“I left, with my head full of doubts,

And here I am, believing in myself

That one day I was”

This is a super powerful song, I listened to it the first time a few years ago and moved something in me. Actually put a face to those who used to be numbers and made me aware of why people will give up so much for a dream, which is why it is my favorite immigration themed song.

This song brought me to the awareness of what is behind all this social relocation and how sometimes this peoe are perceived by the receiving society. At the end, we are all space troopers in this, the only space ship we have, named planet earth.

This song was originally written by Rocio Durcal. However, Juan Gabriel performed this wonderful rendition in respect to his late mother. Virtually abandoned by his mother at a young age, Juan lived much of his life feeling rejected by the person who he felt the most love for. Later in life he was adopted by another family and rose to stardom where he tried reconnecting with his mother multiple times only to be rejected then as well. After reaching stardom as a performer, Juan Gabriel still provided funds to his mother so that she could live comfortably as a form of respect and filial devotion. To many Juan Gabriel is known as “El Divo de Juarez” but this song is a raw and passionate example of what the singer has gone through in life to reach his success. Juan Gabriel’s unrestricted and unashamed vocals during his live performance of this song reached me although I haven’t gone through the same experience, to those who know of this song it is clear that he encaptures the painful regrets and anguish, the passion that is embedded in much of hispanic and latino culture. This song will always hold a special place in my heart as a fundamental pillar in my culture.

Favorite Line:
Prefiero estar dormido que despierto, De tanto que me duele que no estés. (“I’d rather be asleep than awake.  It hurts so much that you’re not here”)