LAME DUCK’S REVENGE: TRUMP’S MIDNIGHT REGULATIONS WILL CONTINUE TO HURT IMMIGRANTS EVEN AFTER HE IS GONE 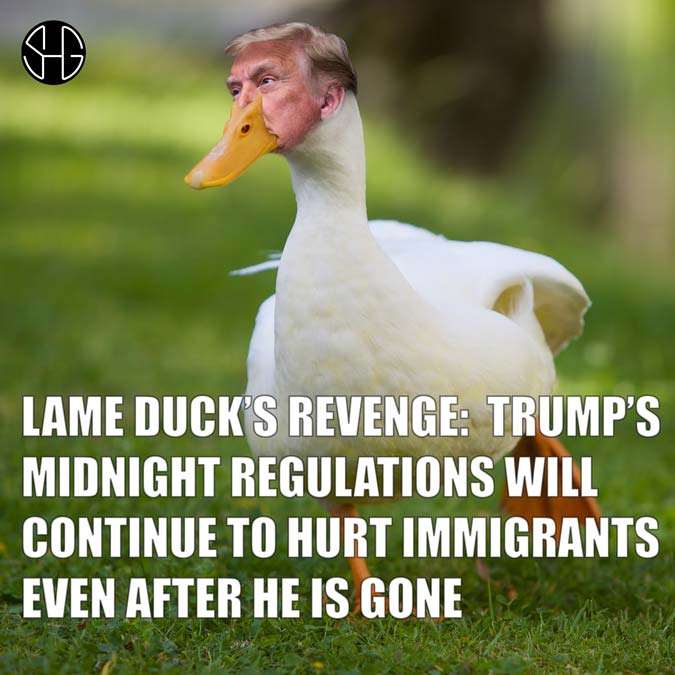 Since losing “bigly” (sic) in the presidential election of November 3rd, 2020, the Trump administration, in addition to ignoring a growing pandemic and economic meltdown, embarrassing themselves in courtroom after courtroom, and losing the State of Georgia (Georgia!!!!) 3 separate times, has been furiously trying to codify some of their immigration changes into federal regulation.  These legal totems to the Trump Regime’s White Supremacist, “Populist” policies will be difficult, but not impossible, for a Biden Administration to defuse.    Midnight regulations are United States federal government regulations created by executive branch agencies in the lame duck period of an outgoing president’s administration. And the lamest of ducks, Donald J. Trump, aided by his minion immigration policy advisor Steven Miller, is leaving a minefield of over 400 policy changes in its wake.   Some of these policies, including the Muslim “Travel” Ban and the policy revoking DACA will be reversed almost immediately after Biden swears in on January 20th, 2021.  However, Trump’s regulations will be harder to reverse, as they go through a more rigorous rulemaking process.  To reverse some Trump regulations, the Biden administration will have to go through the slow, laborious process of promulgating their own regulations.

Here are the four of the most odious USCIS regulation changes, along with a link to their announcement in the Federal Register, that the Trump administration wants to enact before the lights go out:

**(CURRENTLY ENJOINED IN SOME STATES)**

“Public charge” is a ground of inadmissibility that could bar an individual’s admission to the United States on a visa or application for lawful permanent residence if the government determines the individual is likely to rely on certain public benefits in the future.  This rule has been litigated for the better part of two years, and it is currently enjoined in some jurisdictions (including Pennsylvania and New Jersey).  The final rule defines public charge as an alien who receives one or more public benefits (as defined in the final rule) for more than 12 months, in total, within any 36-month period (such that, for instance, receipt of two benefits in one month counts as two months).

Inadmissibility based on the public charge ground by looking at the factors outlined in 8 CFR 212.22. An adjudicating officer reviews the totality of an alien’s circumstances when deciding whether an applicant is likely at any time to become a public charge. This means that the adjudicating officer must weigh both the positive and negative factors. As required by section 212(a)(4) of the INA, 8 U.S.C. 1182(a)(4), and by this final rule, when making a public charge inadmissibility determination, a USCIS officer must consider the applicant’s:

According to USCIS, no single factor makes an alien inadmissible based on the public charge ground, except not filing a sufficient Form I-864 or Form I-864EZ, when required. The determination of an alien’s likelihood of becoming a public charge at any time in the future is a prospective determination that is based on the totality of the alien’s circumstances and by weighing all of the factors that are relevant to the alien’s case.

This rule is troublesome on multiple grounds.  For one, it is causing terror in immigrant communities in the middle of a pandemic.  Aliens are afraid to access services that their children and families are entitled to out of fear of this rule.  Secondly, it penalizes poor people, whose labor and efforts to create a better life, since the founding of this country, has fueled the rise of the American economy. Coming to America with nothing but hopes and dreams, and building yourself into something, is kind of the essence of the American story.  At least the story that we like to tell ourselves.  Finally, this rule is very subjective, especially with the “likely to become” a public charge language.  It gives USCIS officers way too much discretion and possibilities for abuse.  I can foresee the “likely to become” language being interpreted very differently depending on the adjudications officer.  Biden has pledged to reverse this rule and we hope that he sticks to his promise.

Ten days before he is evicted from the White House, the Trump administration will enact a rule that guts what remains of protection for refugees seeking asylum in the United States. A final middle finger from Steven Miller and his xenophobic handlers at FAIR and CIS, This rule is a clear violation of the Immigration and Nationality Act, the intent of Congress, and the treaty obligations of the United States.

Human Rights first explains all the horrible effects this rule will have on asylum seekers:

Because raising your prices (over 60% in some cases) is exactly the thing that any business does in the middle of a pandemic and nationwide recession.  For example, an N-400 application (naturalization application) currently costs $640.  Under this new regulation, an N-400 would cost $1170, a nearly 100% increase in filing fee that seems like it’s designed as a poll tax hiding in plain sight.  These fee changes were scheduled to be enacted on October 2nd, 2020 of this year, but mercifully a Federal Judge for the Northern District of California has enjoined them for the time being.  USCIS claims they are running out of money.  However, their budget crunch is a product of their own policies, as they have shifted resources from case adjudication to become more of an enforcement agency under the Trump administration.

The U.S. Department of Homeland Security (DHS) is proposing to eliminate employment authorization eligibility for aliens who have final orders of removal but are temporarily released from custody on an order of supervision.  These are for individuals who may have been ordered removed but, for whatever reason, ICE is not able physically remove them from the United States.  These individuals are permitted to remain in the United States with their unexecuted order of removal while ICE attempts to obtain a travel document to remove them from the United States.  During this process, the alien is able to obtain a work permit and work legally.    Many of these individuals have US citizen family members that they support with their work permits.

This rule will deny these aliens the right to work, thereby giving them and their families a choice:  try to work illegally to put food on the table or don’t work and starve to death.  Just a mean spirited rule, typical of this administration, that, thankfully, will be gone in less than 40 days.