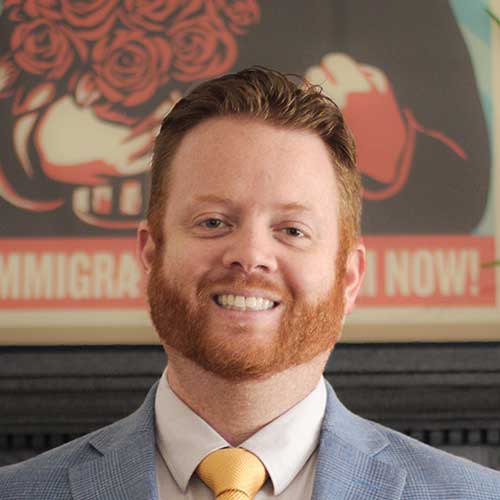 Attorney Matthew Hartnett has extensive experience litigating removal defense cases before the US Immigration Courts and the Board of Immigration Appeals (including asylum, withholding of removal, cancellation of removal, adjustment of status and complex waivers). Mr. Hartnett also represents clients before USCIS and other DHS sub-agencies in a variety of matters such as, but not limited to: family-based immigrant petitions (marriage adjustments), naturalization, waivers of inadmissibility, VAWA and U visas for victims of crime.

Mr. Hartnett also manages Solow, Hartnett and Galvan’s Business Division where he represents small and medium-sized companies in an array of employment-based immigration matters for their employees, including PERM Labor Certifications, EB1/EB2/EB3 petitions, H-1B visas, and I-9 issues.  In the SHG Law Business Division, Mr. Hartnett also represents individuals and churches seeking R-1 religious worker visas, as well as other specialty nonimmigrant visas such as O-1 and P-1 nonimmigrant visas.

Prior to founding Solow, Hartnett and Galvan, Mr. Hartnett was a Senior Associate Attorney at Solow, Isbell & Palladino, LLC.  He is also a member of the American Immigration Lawyers Association (AILA) and possesses near-native fluency in Spanish.