Patria y Visa: A History of Cuban Migration to the United States and the Cuban Adjustment Act 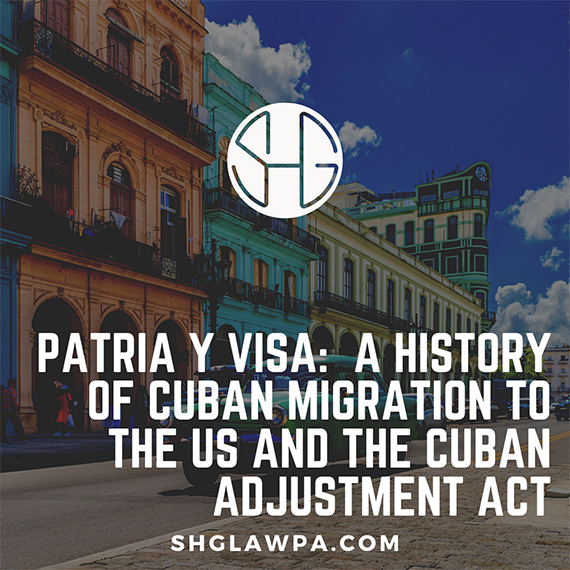 A multi-part series By Yosvan “Jimmy” Barroso, a Cuban attorney who migrated to the United States in 2017

Part 1 – Why Do the Cuban People Migrate?

I asked myself that question while boarding Air Europa flight UX052 that was taking me back to Havana, Cuba, after having spent the last 27 months of my life in the United States.  Someone can forget the reasons that led him to leave his home country when he has spent so much time homesick for it. So maybe I needed a different perspective; one that was not distorted by the longing that we Cuban émigrés have for our culture, which we carry wherever we are.  I was born surrounded by the sea, Salsa music and delicious rice and beans delicatessens.  I was raised between colonial balconies and the smell of tobacco and the molasses of sugar cane. I grew up repeating the same slogans as my parent’s generation; a patriot reading Martí, wanting a more humane Cuba, with everyone and for the good of all. Loving that unfortunate island in the middle of the Caribbean, from which everyone wants to leave.  I graduated from the University of Havana with a law degree in 2017.  Before I arrived in the United States, I ran one of the most popular tourist operations in the City of Havana. I have a wife and a 4-year-old son I left behind when I immigrated to the United States. I also have parents and an extended family I left behind.  So why did I leave behind my family and life in Cuba?  Why do hundreds of thousands of other patriotic Cubans hope to leave and start their lives away from the Island?  What are the causes behind an exodus of more than 60 years, which has led more than 3 million Cubans to settle on the other side of the Straits of Florida?

I remember the answer to the same question from Christian, a “Balsero” friend I met on my trip home while I was serving my 7-day Quarantine that all returning visitors to Cuba have to pass through.  The answer he gave me is that Cubans “do not emigrate … they flee.”  Although Cuban migration to the United States is a social phenomenon that has existed for more than 100 years, the triumph of Fidel Castro’s Revolution marked a before and after in the migratory flow between Cuba and the United States. The communist policies adopted at the beginning of the process, such as the Agrarian Reform and the Nationalization of large and small private companies, led to the first large waves of Cuban migration in the early 1960s.  In the early 1980s, with the consent of Fidel Castro and organized by Cuban Americans, over 125,000 Cubans arrived in Southern Florida during the Mariel Boatlift.  In the early 1990s, following the dissolution of the Soviet Union, Cuba went through an extended economic shock known as the Special Period that again pushed people to emigrate.

Since then, complex political factors and a very difficult economic scenario on the island have continued to push the Cuban people to try to cross the 90 miles that separate Greater Antilles to their “Promised Land”.  A dangerous journey, since many of these trips are made on small-scale rafts, of homemade production, or via the dangerous and treacherous route to the US border via Mexico.  Some Cubans even attempt to enter the United States via the Bering Strait that separates Russian from Alaska.  But for the Cubans, there is no doubt or regrets: anything better than staying in Cuba. And of course, always guided by the legal protections and promises of the Cuban Adjustment Act of 1966.