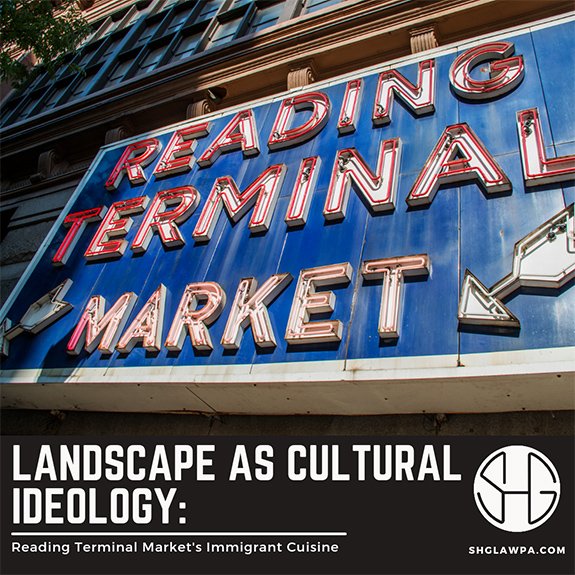 Philadelphia’s food markets welcome their visitors to remarkably liminal spaces. Often dominated by immigrant cuisine, their vendors produce not only commodities but diverse landscapes “betwixt and between” cultural practices. Reading Terminal Market can help us understand how our cultural, political, and social histories inform spatial construction. As geographer Donald Meinig suggests, “If we want to change our landscape in important ways, we shall have to change the ideas that have created and sustained what we see.”

As Salam Bustanji, Noah Hallman, and I experienced, space and place are anything but absolute and fixed in the Reading Terminal. Even its signage resembles 80s architecture, positioned adjacent to buildings defined by 21st-century modernism. Since 1893, the market has been a palimpsest of local productivity, maintaining visible traces of Philadelphia’s early colonial occupants alongside powerful immigrant artistry. The thoughts and convictions of the latter group poured into the bazaar over time, pushing its visitors to navigate the space in a fluid, worldly manner. The three of us at SHG hoped to better understand the market’s immigrant vendors, further enlivening their narratives and welcoming their construction of a culturally diverse landscape.

We chose to survey several immigrant establishments in the market. Of course, this list is not exhaustive nor represents aversion to any other cuisine in the market. We engaged with immigrant businesses guided by the principal relationship between space and economic foundation; space is reactive—as any population supports immigrant businesses, they offer implied endorsement of their spatial belonging and encourage their righteous livelihood.

I offer my due apologies to any carnivorous readers, too; as I keep a vegetarian diet, most of the food discussed below is meatless.

We first stopped at Kamal’s Middle Eastern Specialists, a Market establishment born in 1981 from the fruits of Syrian-Venezuelan immigrants. From Hisham, the founders’ son, we learned that Kamal’s was the first Middle Eastern restaurant in the Reading Terminal. He storied the restaurant’s gradual growth: once half the size of its current double-occupancy status, the business benefited from early success that allowed his parents to purchase a second, adjacent plot. Columns separating Kamal’s and its previous neighbors remain. His parents, he said, were ethnically Syrian but traveled to the United States from their last home in Venezuela. They arrived in the United States via visa status and were inspired to bring their native food to Philadelphia, hoping to “enjoy their culture here.” As our chat wound down, Salam, Noah, and I enjoyed the vegetarian platter, pictured by Salam Bustanji below. The restaurant also offered plenty of meat-based options, including lamb shawarma, a childhood favorite of mine.

Next, we visited Nanee’s Indian and Pakistani Kitchen, which offers gluten-free, vegan, and halal cuisine and groceries. We put together a vegetarian platter there, too, consisting of chana masala, saag paneer, and naan bread. We learned of Sabina and Donish Ahmad, who started the restaurant in 2004 with their aunt, Tayyaba Khanum. The recipes underlying the rainbow assortment of traditional Indian-Pakistani dishes come from Khanum’s mother, Hamida. From her, the restaurant gets not only its flavors but also its name: “Nanee,” or “Grandmother.” Visitors can select from an array of vegetarian dishes, including but not limited to chana masala, okra masala, coconut-curried cauliflower, yellow dal, zucchini curry, and eggplant masala. The eatery also offers halal chicken and lamb from their traditional tandoor oven, producing popular dishes like tandoori, chicken tikka masala, chicken korma, coconut curry chicken, and salmon curry. Salam, Noah, and I greatly enjoyed the cuisine and our conversation with the restaurant’s current owner.

We then stopped by Umi Sushi & Seafood, a restaurant run by Indonesian immigrants serving Korean, Japanese, and Indonesian fusion. There, we met with a group of extremely hospitable employees. From them, we learned that the restaurant’s founders, Suzi and Yong Kim, were Korean-American immigrants who began the business in Ardmore, Pennsylvania, in 1982. Their aim, they said, was to “blend cultures,” creating an artisanal Asian-American blend. One employee spoke to us with heartfelt candor, detailing her journey to America in hopes of “changing (her) life and finding a better quality of life.” “This is the country of opportunities and education for our children,” she said and continued to speak of immigration’s role in her worldly identity. She and her co-workers attach their passion for Asian fare with volunteer work at a migrant education center, exemplifying the ardor and devotion immigrant groups must often exert to make a home for themselves and others. Salam, Noah, and I tried their vegetarian cucumber avocado roll. The establishment otherwise offers an impressive menu of more than fifty prepared seafood dishes and hundreds of premium sushi, sashimi, and maki rolls. If you prefer cooked dishes, Umi Sushi can meet your needs, too, serving dishes like salmon teriyaki, scallops, lobster mac and cheese, couscous, and grilled vegetables.

Our last stop was Little Thai Market, a foodery and grocer that has found home in the Reading Terminal Market for over twenty years. The owner of the restaurant was an immigrant from Bangkok, Thailand. Although this individual was unavailable, we spoke with another Thai immigrant who found work at the restaurant a year prior. He told us of the popular menu, serving favorites like shrimp pad thai, basil chicken spring rolls, and coconut soup perfumed with lemongrass. The restaurant can also travel home with you, as the establishment maintains a light grocer from which visitors can purchase a selection of curry pastes, galangal, fish sauces, and lime leaves. Noah and Salam tried the shrimp pad thai. “As a pad thai enthusiast, this dish shocked me,” Noah Hallman commented. “The rich and intense flavors knocked me out of the ballpark,” he continued. 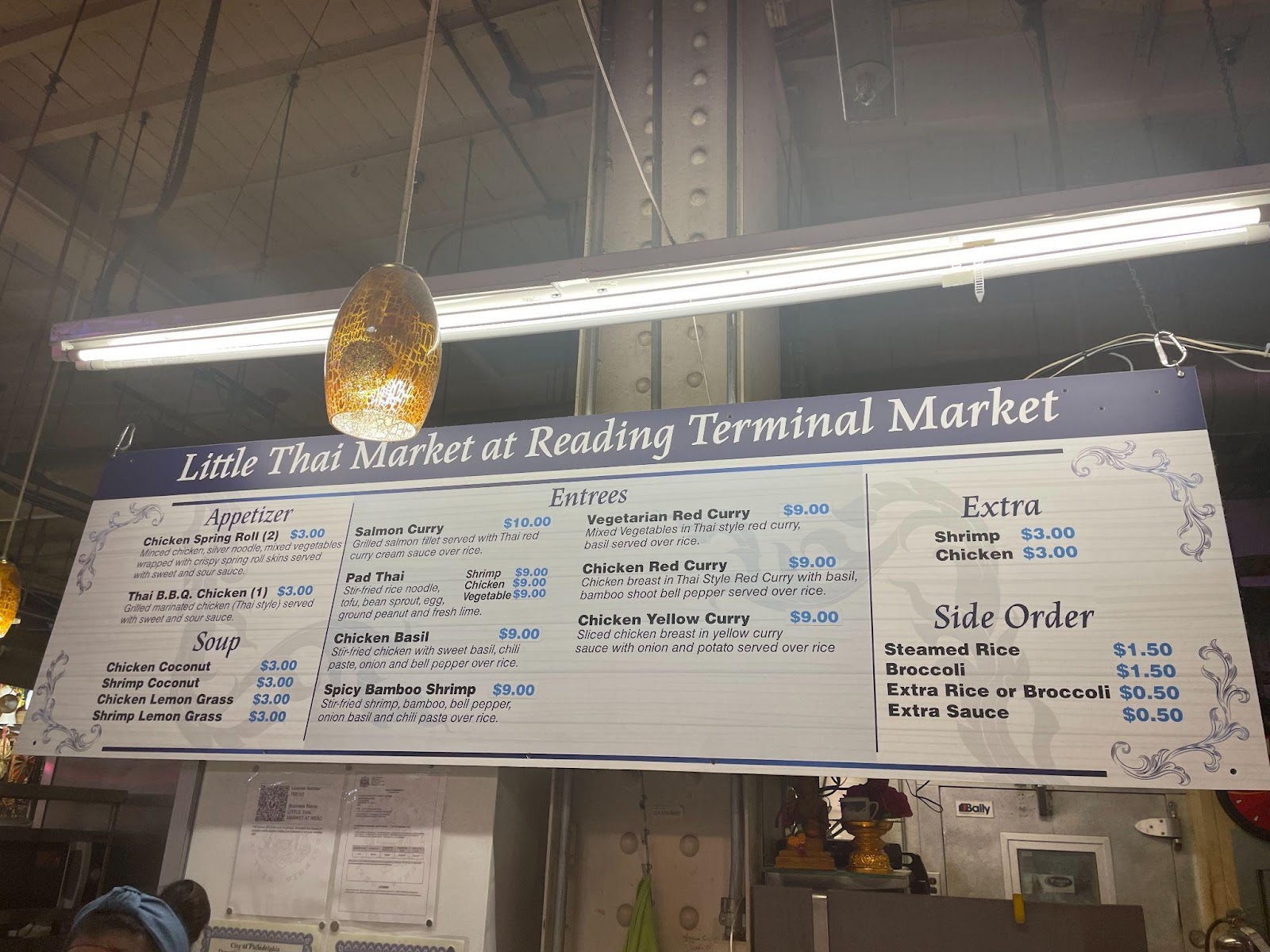 Exiting the market, we made a final stop at the Amish grocer. This was an apt close to our trip, returning to the early history of the Reading Terminal and allowing our perusal to encompass the Market’s diversity. Today enveloped by international cuisine from the Middle East, Korea, Japan, Indonesia, Thailand, India, and Pakistan (to name a few), the Reading Terminal Market exemplifies how cultural ideologies create and inform physical space. Each immigrant group with whom we spoke described dishes frequently enjoyed by Philadelphian patrons, ensuring their restaurants remain homes for their past and posterity in the city’s center.