Sexual and Domestic Violence against Immigrants and T visas 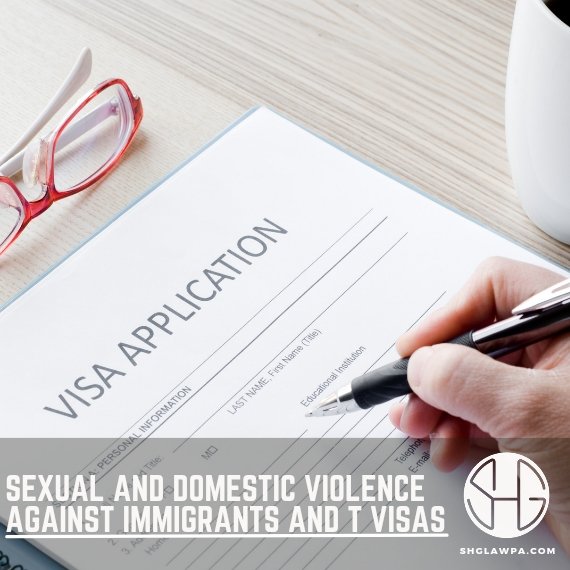 In the previous two blog posts, we discussed T nonimmigrant status (T visa) applications in situations involving the exploitation and abuse of immigrant workers. In this blog, we examine the usefulness of the T visa in cases of sexual and domestic violence.

Immigration regulations state that eligibility for a T visa requires a showing that the applicant was a “victim of a severe form of trafficking in persons,” which includes “sex trafficking in which a commercial sex act is induced by force, fraud, or coercion” or in which the person induced to perform the commercial sex act is under 18 years old. The regulations define “commercial sex act” to mean “any sex act on account of which anything of value is given to or received by any person.” This definition of “commercial sex act” is quite broad, which results in many people being potentially eligible for T visas who were not coerced or forced into prostitution or pornography in the way we often think of as trafficking. The key is whether something of value – which will not necessarily be money – was given or received in exchange for (“on account of”) the sex act.  Elements of labor trafficking are often found in abusive interpersonal relationships as well; abusers use force or coercion to compel a partner to labor inside and outside of the home.  We will look at several case examples to illustrate this point.

In one case a T visa was granted to a factory worker who was sexually assaulted numerous times by her boss.  Her boss began asking her inappropriate questions about her personal life and immigration status, and then one day he sexually assaulted her at work. He warned her afterward to not say anything about the assault, threatening that if she mentioned it to anyone he would call immigration officials in order to have her deported.  He told her that she “needed the job” because she was a single mother and was the sole provider for her children. He assaulted her and sexually harassed her on many other occasions, often threatening her regarding her immigration status.  She was finally able to leave the job, and years later she filed for a T visa.  It was determined that her submission to the forced sex acts was a condition of her employment and therefore a commercial sex act; she was forced to exchange sex in order to keep her job.   She was granted T visa status.

In another case, a woman met a U.S. citizen on a dating website and began a romantic relationship with him. He flew to her country to meet her and her family and proposed to her. She entered the U.S. on a K-1 (fiancé) visa, and began to live with and have a sexual relationship with him. She believed that they would be married. He insisted that she cook, clean, and do all domestic work for him. He began to physically abuse her, call her ‘worthless’, and isolate her from others. He also made her work in a retail store he owned but did not pay her for that work.  He told her that if she stopped working he would tell her family they had never married and then have her deported to her home country.  He also forced her to continue to have sexual relations with him, telling her that if she refused, he would throw her out on the street or not purchase her food or other basic necessities.  She felt she could not return to her country because sex outside of marriage, and divorce, are not acceptable there. It was found that the man subjected her to indentured servitude in his home and retail business through the use of force, fraud and coercion, specifically by threats of serious reputational harm to her in her home country.   It was also found that he forced her to engage in commercial sex acts because he coerced sex acts in exchange for food and shelter.

The woman in the third case came to the U.S. when she was 20 years old. Initially detained when she crossed the border, she was released to a family friend.  Soon after he began to abuse her physically, sexually, and verbally. He made her work at a local restaurant and turn over all of her pay to him.  In the apartment, he forced her to cook all of his meals from scratch, serve him, clean, and do laundry for him.  He often forced her to have sex against her will. After several years of abuse, a friend offered her a place to live and helped her leave.  For a long time, she was afraid to report his violence to the police, seek help, or tell anyone about his violence. However, after many years of living in the U.S. without legal status, she made an application for T nonimmigrant status. She showed that he forced her to provide labor inside and outside of the home for him, including forced sexual relations.  In addition, she was able to demonstrate that she was in the U.S. because of human trafficking, despite the fact that she left her abuser many years ago. The terrible trauma she experienced seriously impacted her life, with consequences that lasted her entire adulthood.  These examples show that the T visa may be a very useful tool to help immigrants who are abused and exploited sexually, often in situations that don’t fit into preconceived notions of sex or labor trafficking. Some immigrants who have experienced sexual violence and abuse may meet the requirements of this process, while others may be able to apply for a U visa (for victims of certain crimes) or self-petition under the VAWA (for immigrants abused by U.S. citizens or permanent resident spouses). Each process has different eligibility requirements and different benefits. The important point is that immigrant victims of sexual exploitation and violence should seek the advice of an immigration lawyer experienced in handling these matters, who can best explain possible strategies and solutions.  If you are interested in learning if you qualify for a T visa, please feel free to contact attorney Kate Brown of Solow, Hartnett & Galvan for a legal consultation.