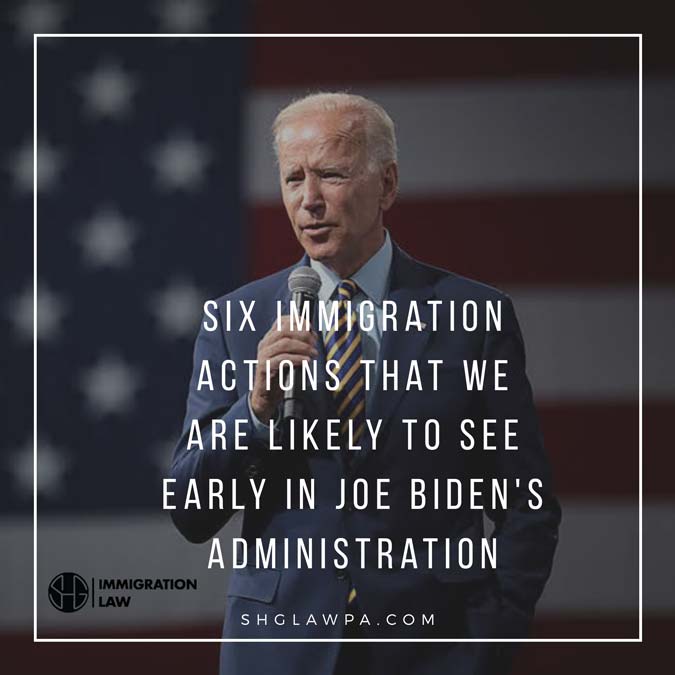 It’s over!  From the moment Donald Trump descended his golden escalator, proclaiming Mexicans “Drug dealers, criminals and rapists,” my colleagues, clients and I have been fighting an asymmetric war against a motivated anti-immigrant policy machine.  Thanks to the American people, four years of relentless and systematic assault on our clients and their families is nearing an end.  And a special thanks to our wonderful hometown of Philadelphia, who has been preserving democracy for 250 years and played an invaluable role in ushering in the Biden administration.

There still could be some radical last minute moves from Trump, Stephen Miller, Chad Wolf and the rest of the boys at Cobra Kai et. al.  However, for our team, and most importantly, our clients and their families, it feels like a new dawn.  For many of our clients, including families and American businesses alike, January 20, 2021 cannot come soon enough.

But what will that day look like?  Some, but not all, of President-Elect Joe Biden’s immigration platform will depend on what happens in the Georgia Senate run-off that will take place in a few months.  A White House and Congress controlled by Democrats would provide an opportunity to pass Comprehensive Immigration Reform, the unicorn of immigration politics for the past two decades.  Assuming that the Senate remains in Republican control until at least 2022, there are still dozens of Executive Actions that a Biden administration can take to revoke Trump’s radical immigration policies.  Most of all, Biden promises to build a fair and humane immigration system and reverse the hateful and destructive policies of the Trump administration.  Here are 6 likely actions that we will see immediately from the Biden administration:

Biden plans to send an immigration bill to Congress on his first day in office in January that includes a pathway to citizenship for the estimated 11 million immigrants living in the country illegally, a campaign official told Reuters.

The bill would also address the status of so-called “Dreamers” living in the United States illegally after entering as children. Under the Deferred Action for Childhood Arrivals (DACA) program started by former President Barack Obama, roughly 644,000 Dreamers are granted deportation relief and work permits.

Trump sought to end DACA, but as we examined in a previous blog post, the U.S. Supreme Court ruled in June that his administration did not follow proper legal procedures.

Much of this, again, will depend on the results of the Georgia Senate run-off.  Even in a Republican controlled Congress, there is still much political support for legalizing Dreamers, so this legislation could actually happen no matter who controls Congress.  However, Dreamers have been promised a pathway to citizenship before, only to be let disappointed time and time again by our political leadership.  This time, I truly do think that something will happen, and happen quickly, for Dreamers.

On day one of his presidency, President-Elect Biden intends to rescind Trump’s travel bans on 13 countries, most of them either African or majority-Muslim nations.  The bans could be easily undone, as they were issued by executive order and presidential proclamation, according to policy experts, but lawsuits from conservatives could delay the process.

A Biden administration will work to reverse many of the rules implemented by the Trump administration, such as “public charge,” which allows federal immigration authorities to deny green cards to legal immigrants if they’ve used, or found to be “likely to use” certain public benefits.  It also plays on the racist trope that immigrants come to the United States just to get welfare and food stamps.  Reversing the public charge rule will take a Biden administration a little more time to reverse, since it was implemented via the regulatory process.

President-Elect Biden has called for an immediate end to the building of Trump’s border wall.  Over the past 2 years, Trump has siphoned billions from military construction projects and other programs to pay for this barrier, much to the dismay of lawmakers in both parties. But legislative efforts to shield the Pentagon budget so far have fallen short, while legal challenges to halt construction of the wall are winding their way through the courts.

“There will not be another foot of wall constructed on my administration, No. 1,” Biden told National Public Radio earlier this year. “I’m going to make sure that we have border protection, but it’s going to be based on making sure that we use high-tech capacity to deal with it.”

That would also likely mean withdrawing National Guard troops Trump sent to the border to support the Department of Homeland Security, a deployment extended through this year.

President-Elect Biden has said that the Trump Administration’s politically motivated decisions to rescind Temporary Protected Status- without regard for current country conditions- is a disaster.  His administration will most likely restore TPS to individuals from El Salvador, Honduras, and Haiti, and expand the program to include individuals from other countries in serious political and humanitarian crises.  For example, don’t be surprised to see Venezuelans offered TPS protection in the first few months of a Biden administration.  Biden said in late October that he would immediately grant humanitarian protections to Venezuelans living in the United States.

Refugee admissions dropped to 15,000 in the last year of the Trump administration.  The cuts made by the Trump administration set refugee admission numbers at a record low.  President-Elect Biden has pledged to raise these admissions to 125,000 per year.  However, Trump’s gutting of the refugee program was so severe, that it will take a while to fix the overseas vetting systems and personnel necessary to administer this program.