Sue your way to Citizenship: How to use Federal Litigation to Resolve Long Delayed Naturalization. 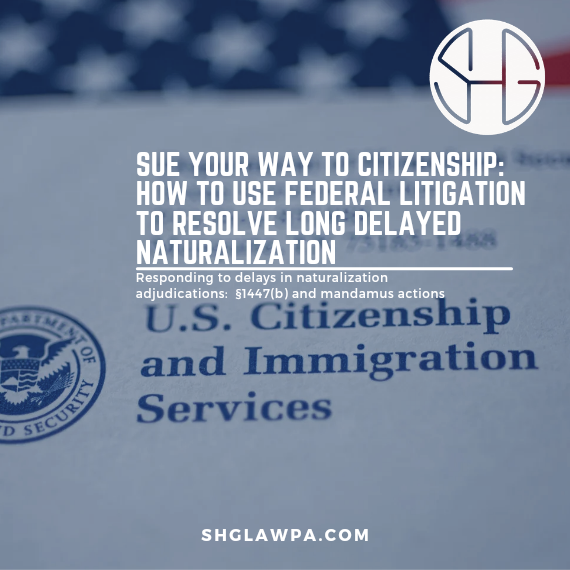 Naturalization is one of the most rewarding elements of our jobs as attorneys at Solow, Hartnett and Galvan. Naturalization is the culmination of many years of hard work and dedication by our clients that allows them to become United States citizens. In recent years, the policies of the Trump Administration and the COVID-19 pandemic have conspired to make our client’s journey to citizenship both more difficult and delayed.

USCIS claims to be making significant strides in addressing processing delays, and says that the pending naturalization case queue decreased by about 14% from Januaryto October 2021. Still, processing times for naturalization applications remain long: up to 17 months in Philadelphia and18 months in Mount Laurel, New Jersey Field Office. So, the question of what can be done about USCIS delays in adjudicating N-400s remains as relevant as ever. This post will explore two useful strategies for dealing with these delays: federal court actions under 8 USC §1447(b) and mandamus/APA actions.

§1447(b) Petition for Naturalization

8 USC §1447(b) [INA §336] authorizes an action in federal District Court if USCIS has not issued a decision on an N-400 within 120 days of the initial interview (“examination” in the statute) of the naturalization applicant. This 120-day period remains the trigger for a §1447(b) action, even if post-interviewsecurity checks are still pending, or in the case of a second interview under 8 CFR §335.3(b). In a §1447(b) action the court takes jurisdiction over the naturalization application, and may either make the decision on the application or remand to USCIS,with appropriate instructions, to make the decision. [A separate provision, 8 USC §1421(c) [INA §310(c)], gives District Courts authority to make de novo reviews of N-400 denials.]

Section 1447(b) motions are especially helpful to resolve outstanding FBI Background Checks.  Many immigrants who have satisfied the requirements to become U.S. citizens are left in limbo for months or years due to slow processing of a background check called the FBI namecheck. Following the events of 9/11, there have been systemic delays in naturalization because the government changed the FBI name check procedure so that applicants’ names are checked not only against the names of suspects and targets of investigations, but also innocent people who have been in contact with the FBI, such as witnesses, victims, and people who have applied for security clearances. Tens of thousands of naturalization applicants have suffered from the delays.  It is our experience that filing a Section 1447(b) motion often compels the FBI to complete their background checks, usually within 30-45 days of the complaint.

Writ of Mandamus and APA

The right to apply for an immigration benefit such as naturalization creates a concomitant duty on the part of USCIS to adjudicate the application. But what can a naturalization applicant do in the case of an unreasonable adjudication delay that does not fit the §1447(b) criteria? The Mandamus Act (28 USC §1361) gives federal district courts jurisdiction to compel a government official to perform a nondiscretionary duty owed to the plaintiff; the Administrative Procedure Act (5 USC §701-706) authorizes the court to compel agency action unlawfully withheld or unreasonably delayed. It is important to rememberthat the relief sought in mandamus and APA actions is an order compelling the agency to act on the application. Unlike under §1447(b), mandamus and APA actions never vest jurisdiction over the naturalization application with the federal courtdirectly. The court may order USCIS to make a decision by scheduling the naturalization interview but the discretion to approve or deny the application stays with the agency.

In a mandamus/APA action the court must first determine whether the agency owes a nondiscretionary duty to the plaintiff, and, if so, whether the agency’s adjudication has been unlawfully withheld or unreasonably delayed. In cases involving long delays in scheduling naturalization interviews district courts have not interpreted these matters consistently. Some courts have found that since USCIS is prohibited under 8 CFR §335.2(b) from interviewing a naturalization applicant until the agency receives a completed FBI background check, and since the statute and regulations do not prescribe a time limit for the pre-interview part of the naturalization adjudication process(including the background check), there is no clear, nondiscretionary duty that the court can compel the agency to take. Other courts have ordered relief when the naturalization interview has not yet been scheduled within a “reasonable” period of time.

In practice, the attention and pressure brought to bear on the agency by bringing a mandamus/APA action can sometimesprompt USCIS decision-makers to act. The involvement of anAssistant US Attorney and federal judge may result in a response in cases of unusual delays of naturalization adjudications when other attempts to get the agency to adjudicate the application have failed. The immigration attorneys at Solow, Hartnett & Galvan, LLC have decades ofexperience bringing mandamus/APA actions against USCIS for unreasonable delays of naturalization applications, and can bring these actions in both the Eastern District of Pennsylvania and the District of New Jersey.