The Good, the Bad, and the Ugly: Biden’s First Months in Office 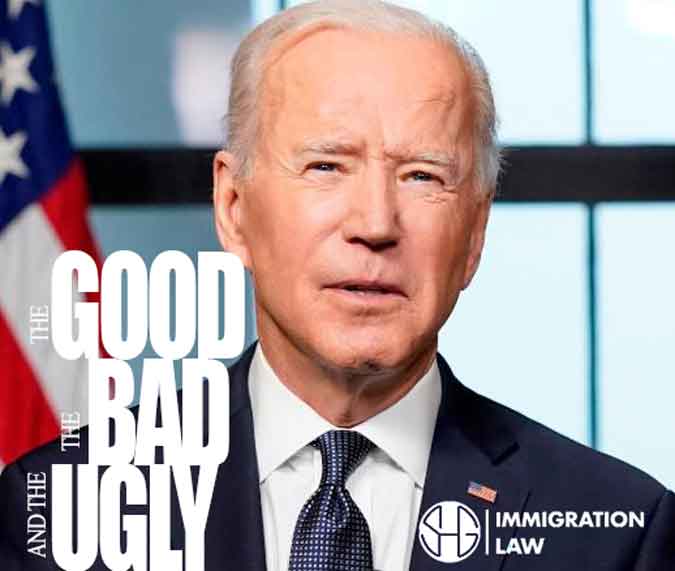 President Biden has been in office for around three months. On the campaign trail, he made plenty of bold promises about immigration reform –– has he delivered? In some areas, massive strides have been made to defend the rights of immigrants. In other areas, he’s fallen short of his promises. In one area in particular, he’s continued Trump’s legacy of cruelty towards noncitizens.

The first few months of the Biden administration has been marked by a flurry of executive orders and presidential proclamations that have affected many areas of immigration. In his first week in office, Biden quickly ended the Trump-era Muslim Ban, which had banned travel from twelve countries, seven of which were majority-Muslim.  In his Proclamation, Biden wrote, “Beyond contravening our values, these Executive Orders and Proclamations have undermined our national security… they have separated loved ones, inflicting pain that will ripple for years to come. They are just plain wrong.”

In addition to ending the Muslim Ban, Biden promised to preserve and fortify Deferred Action for Childhood Arrivals (DACA). Hundreds of thousands of young people currently hold DACA status, and the Migration Policy Institute estimates that another 695,000 people are eligible –– however, under Trump, the government stopped accepting new DACA applications for over three years.

In early March, the Biden administration ended the public charge rule that the Trump administration had implemented in 2019. The Trump rule included a broad expansion of the type of public benefits considered to make someone a public charge, but it also gave discretion to immigration officers in determining which individuals were more likely to become a public charge. Ending this rule allows immigrants who might seek a green card to freely access many public benefits without fear of its impact on their ability to seek an adjustment of status.

Biden has also ended Trump’s absurd “blank spaces” policy which weaponized bureaucracy so that a single blank space on a number of immigration applications, including asylum applications, would result in the application being rejected no matter how irrelevant or inapplicable the question was. The policy required applicants to write “N/A” in every single space that they would have otherwise left blank. Thousands of applications had been rejected for blank spaces and, in late January, the Biden administration officially rescinded this policy.  Biden also recently designated Venezuelans as eligible for Temporary Protected Status which protects Venezuelans from deportation and allows them to work legally in the United States while their home country remains unstable.

Biden introduced a comprehensive immigration reform bill in late February that includes a pathway to citizenship for all eligible noncitizens, DACA recipients, and TPS recipients. The bill would also eliminate per-country caps on employment-based immigration and introduce a number of other reforms. Unfortunately, it’s unclear whether the bill will be successful. Republicans historically rally around stricter immigration laws and don’t look favorably upon progressive immigration reform. With a split Senate, Democrats would need ten Republicans to sign off on the bill in order to avoid a filibuster that would prohibit the bill from advancing toward a vote.

Finally, Biden ended Trump’s cruel and dangerous Migrant Protection Protocols which had forced asylum-seekers to stay in Mexico while their cases moved through the immigration court system. The policy, also known as “Remain in Mexico,” had created a refugee crisis amongst the border cities in Mexico. Thousands of asylum seekers experienced violence and languished in unsafe refugee camps in Mexico while they waited for months to hear about their immigraiton cases.

Although Biden has made progress in protecting the rights of immigrants, the Biden administration has failed thus far to change certain important Trump-era aspects of the American immigration system. One of his more notable campaign promises, a 100 day moratorium on deportations, was blocked by a federal judge in Texas. However, regardless of the decision by the Texas court, Biden could still decide not to deport people. ICE, as an agency, operates under Biden and retains prosecutorial discretion, the authority to decide what charges to bring and how to pursue them. In other words, ICE decides who to deport, and ICE is Biden’s agency.

As of March 15, 2021, Biden has deported 127,457 people. Biden plans to end the separation of parents and children at the border, a practice he calls “horrific,” but what about the parents and children who are separated by deportation? Each of these deportations is a choice, and each deportation ripples across families and communities that the person being deported is forced to leave behind.

Included in that number are several thousand that Biden deported under a controversial Trump-era public health order: Title 42. Trump invoked Title 42 last year in response to the COVID-19 pandemic, claiming migrants pose a health risk to the country. The law does not allow migrants to make their case before a judge, denying them due process and rendering them unable to seek asylum at all. Although the majority of Title 42 deportees are from Mexico and Central America, a significant number also come from Haiti. Using Title 42, Biden has deported more Haitians in the past two months than the Trump administration did all year.

The Congressional Black Caucus and Hispanic Caucus wrote letters to DHS Secretary Alejandro Mayorkas in February expressing their concern over these unjust deportations of Haitians. In the midst of a national reckoning with racial justice and the carceral state (which includes ICE and CBP), Biden is enacting a particularly cruel irony by deporting such a significant number of Black immigrants.

President Biden has also decided to continue construction of Trump’s infamous border wall. During his campaign, Biden claimed “There will not be another foot of wall constructed on my administration.” Although he did issue a 60-day pause on border wall construction when he first entered office, he decided not to make the pause permanent. Many advocates from towns that the border wall disrupts have pointed towards the tens of millions of dollars that each mile of wall costs as money that could instead be invested in border town communities. This week, a federal judge ruled that privately owned land along the border could be seized for the wall. This decision contradicts Biden’s promise to halt construction of the wall leaving both the landowners and the Department of Justice shocked.

Building a wall like the one Trump began constructing – an expensive and practically useless project created mostly to signal that immigrants are not in fact welcome in the U.S. – was widely regarded as unreasonable when Trump first announced it on the campaign trail in 2014. “Build the wall” was a racist rallying cry. Why, then, is Biden continuing its construction? It seems as if Trump’s presidency and the racist movement he emboldened has successfully shifted the overton window regarding immigration and nationalism so far that ideas once deemed unthinkable by most are now being enacted by a center left president with little pushback.

This March, border apprehensions reached their highest level in over 15 years with 170,000 migrants being apprehended in just one month. More than 172,000 people have been detained by CBP, a number that includes 18,7700 minors – although it’s important to note that many of these numbers represent people who have crossed multiple times.

The surge in border crossings is due in large part to home country conditions, exacerbated by COVID-19 and most recently natural disasters this fall, combined with the false perception that Biden will open the border.

The past four years of unthinkably cruel border policy under Trump has proven that whatever level of cruelty is sure to meet migrants on the other side, for the most part, people cannot be deterred from crossing the border. That’s because the majority of people crossing the border aren’t leaving their home countries voluntarily, they’re leaving because they feel like they don’t have any other options. The crisis at the border is not due to an unprecedented influx of migrants but rather the U.S.’s own policies and laws that have engineered a humanitarian disaster.

Once again, it feels relevant to highlight the ongoing national reckoning with racist police brutality and the carceral state. Carceral logic, mixed with nationalist xenophobia, is applied to migrants and asylum seekers: just as the carceral state deems those who have broken the law less worthy of rights, asylum seekers and migrants are seen as undeserving of rights for unlawfully crossing the border. In many ways, that’s why immigrant prisons exist with such deplorable conditions. Biden does have the power to end, or at the very least significantly reduce the levels of, immigration detention.

There’s no denying that Biden’s presidency is significantly better for immigrants than Trump’s, but better doesn’t mean good, and complacency only encourages mild immigration policies. The good news is that public pressure can and does make a difference — just last week Biden announced he would keep Trump’s low refugee cap only to reverse course a few hours later announcing the administration would increase the cap from 15,000 to 60,000. This happened precisely because of the backlash his original announcement received.