UKRAINIAN NATIONALS AND FORMS OF ASYLUM AND REFUGEE PROTECTION 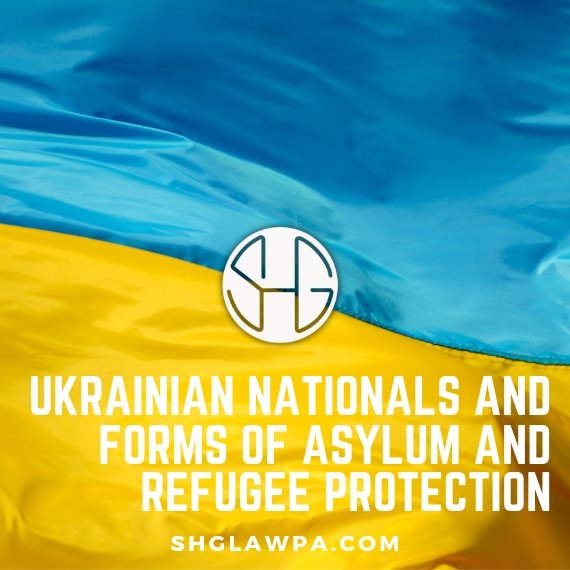 Since Russia launched its invasion of Ukraine on February 24, 2022 over 4.6 million refugees have fled Ukraine to seek safety in other countries. Another 7 million Ukrainians are internally displaced. In this and a second blog post to follow next week, we will briefly look at the international law framework relating to refugees, examine which countries have accepted most Ukrainian refugees, and compare how European and North American countries are responding at this moment compared to their refugee policies in recent years.

The modern-day legal framework on refugees begins with the 1951 Convention Relating to the Status of Refugees. This seminal treaty defined a refugee as a person who is outside his or her country of nationality or habitual residence, who has a well-founded fear of being persecuted because of his or her race, religion, nationality, membership in a particular social group, or political opinion, and who is unable or unwilling to avail him- or herself of the protection of that country, or to return there, for fear of persecution. The core principle is known as non-refoulement: the idea that refugees should not be returned to countries where they would face serious threats to their life or freedom. The Convention was focused on the post-WWII European refugee crisis, but the 1967 Protocol removed that treaty’s time and geographic limits and expanded its scope worldwide. Currently 148 countries are signatories of both treaties.

More recent agreements have further expanded the mandate responsibilities of the UNHCR (the United Nations refugee agency) to include protection of those who have fled their countries because of armed conflict (which is often rooted in the five protected grounds named in the Convention); violence perpetrated by organized gangs, traffickers, and other non-state actors against which the government is unable or unwilling to protect its citizens; persecution on the basis of sexual orientation or gender identity; and disasters (such as drought and famine) linked to persecution on the basis of the Convention’s protected grounds. However, not all countries recognize this post-Convention/Protocol expansion of refugee status. For example, the United States does not recognize persons fleeing organized gang violence and trafficking in Central America as refugees.

With this brief description of the international law refugee framework in mind, we will take a look at where Ukrainian refugees are currently being received. UNHCR figures state that of these 4.6 million refugees, 2.6 million are in Poland, 700,000 in Romania, 429,000 in Hungary, 413,000 in Moldova, 320,000 in Slovakia, 310,000 in Germany, 300,000 in the Czech Republic, and 152,000 in Bulgaria. To date, Italy has accepted 88,000 refugees, Turkey 58,000, and France 45,000. Numerous other countries have accepted tens of thousands of Ukrainian refugees. Thus, a very large majority of Ukrainian refugees are in countries that neighbor Ukraine. Poland has accepted the largest number by far, and Moldova, considered Europe’s poorest country, has received the highest number of refugees per capita of any country. (About 433,000 Ukrainians from territories occupied by Russian troops have been forcibly removed to Russia, which claims they are refugees.)

The United States, on the other hand, has accepted very few Ukrainian refugees to date. Although President Biden has said that the US will eventually resettle up to 100,000 Ukrainian refugees, the US accepted only 514 Ukrainian refugees in January and February and only 12 in March 2022. A more significant but still very limited policy response by the US has been to allow almost 10,000 Ukrainians to enter the US through the US-Mexico border without visas since February 1, a dramatic increase in irregular entries of Ukrainians at the southern border. It is telling that this circuitous route – which requires Ukrainians to enter Mexico on tourist visas and then present themselves at a US border crossing, without any assurance that they will be allowed to enter the US – is the most viable pathway for Ukrainians seeking protection in the US, at least at the moment. Many if not most of the Ukrainians allowed to enter the US from Mexican will likely apply for asylum in the US, but that process is very bureaucratic, long, difficult and uncertain. A second blog post will look at how the current and promised response of European countries and the US to the Ukrainian crisis compares to their policies regarding non-European refugee flows in recent years.  Our law office, Solow, Hartnett & Galvan, LLC, is also providing free legal consultations to all Ukrainian nationals seeking immigration advice.  We are also filing free Temporary Protected Status (TPS) applications for all Ukrainian nationals who qualify.  If you or a loved one are from Ukraine, please feel free to contact the attorneys at Solow, Hartnett & Galvan for a free legal consultation.