YOU DOWN WITH BFD? YEAH, YOU KNOW ME. USCIS Changes their U Visa Policy for Immigrant Victims of Crime 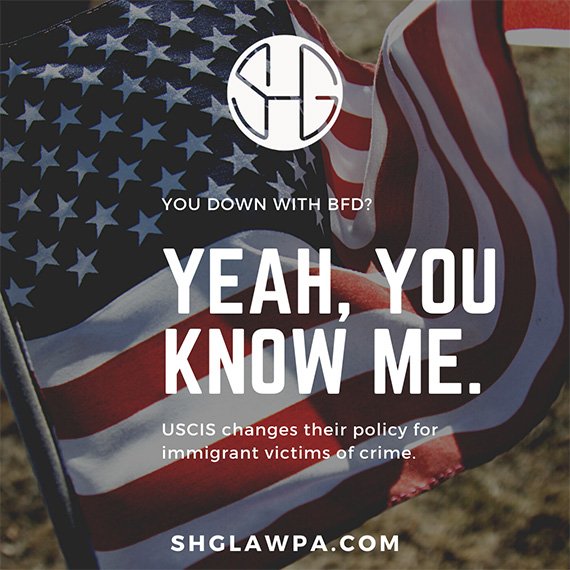 Congress created the U nonimmigrant visa in 2000 when it passed the Victims of Trafficking and Violence Protection Act. The purpose of the U visa was to encourage immigrants to report crimes to law enforcement and also to afford protection for those willing to cooperate.

U visa status benefits include the following:

This visa has been a lifesaver to so many immigrant victims of crime and an aid to law enforcement since it was implemented, but ironically it has been a victim of its own success and the Congressional budgetary constraints that were written into the statute.  There is a statutory limit of 10,000 U visas available per year for principal applicants. This statutory limit has been hit every year since the law was enacted.  As of April 2020, USCIS reported nearly 152,000 pending U visas with an approximate waiting time of 5-10 years, depending on where the U visa Petition was located in the queue.  For years, we have had to field calls from frustrated clients asking us when they could expect their U visa to be approved.  For years, we have only been able to point to USCIS processing times (which currently show a waiting time of 60.5-61.5 months), thank our client for their patience, and ask them to continue to trust our law firm with their case.

Well wait no longer.  On June 14, 2021, USCIS announced a new system called “Bona Fide Determination”, to be used for U-Visa applications. Through this new process, USCIS will issue employment authorization (“work permit”) valid for four years and grant deferred action to petitioners in the United States with pending U visa petitions that it determines are bona fide (made in good faith and without intention of deceit or fraud) and who merit a favorable exercise of discretion. To be considered bona fide, the petition must include a certification from law enforcement that the petitioner was a victim of a crime and that the victim has been, is being, or is likely to be helpful in the investigation or prosecution of that crime,

In addition, USCIS will deem a petition bona fide if:

“Today we are taking steps to help victims of crime and promote public safety,” said Secretary of Homeland Security Alejandro N. Mayorkas. “These are individuals who have come forward to help law enforcement keep us all safe, but who are in need of a measure of protection for themselves as well. The Bona Fide Determination process is consistent with the Department’s statutory authorities and will ensure these individuals receive the support they need.”

This guidance is effective immediately and applies to all Form I-918 and Form I-918A petitions that are currently pending or filed on or after June 14, 2021.