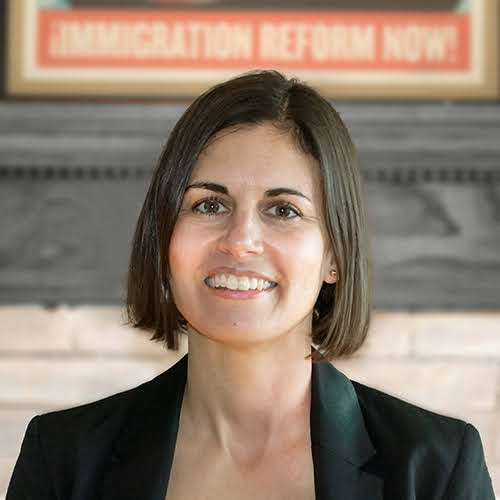 Attorney Kate Brown specializes in T and U visas for victims of crime and has extensive experience representing immigrants who have experienced exploitation in the workplace.  She represents clients before USCIS in a variety of matters, including family-based immigrant petitions (marriage adjustments), naturalization, waivers of inadmissibility, and Consular Processing.  Ms. Brown has also trained attorneys, service providers and law enforcement to identify signs of labor exploitation and to secure legal remedies for those affected.

Prior to joining Solow, Harnett & Galvan, Ms. Brown was a supervising attorney at Justice at Work where she initiated the organization’s immigration project, helped develop and build the organization’s Anti-Trafficking project, and assisted over one hundred trafficked workers to secure lawful immigration status in the United States and reunite with their families.

Ms. Brown is a member of the American Immigration Lawyers Association (AILA) and fluent in Spanish.

Several generations ago my family members made their way to the United States from Russia, Ireland, Germany and Wales.  My father’s paternal grandparents fled Russia to escape persecution.  They changed their last name to “Brown” when they arrived at Ellis Island and they settled in Philadelphia where my great grandmother sold used clothing door-to-door.  My father’s maternal grandparents emigrated from Ireland to New York where my great grandfather found work on the construction crews that built the Holland Tunnel.  My mother’s great grandparents left Ireland, Germany and Wales and settled in coal country Pennsylvania.

I often think of that first generation and the sacrifices they made for our family.  I take great pride in representing new first-generation Americans as they navigate the legal system to build a new life for their own families.